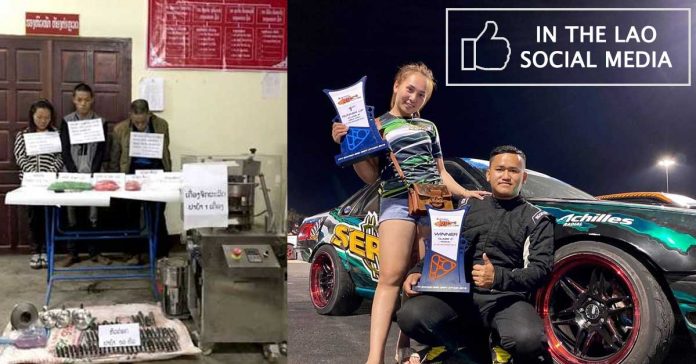 The Laotian Times brings our readers a round-up of some of the most shared topics this past Christmas week, based on reach and engagement on Facebook. From armed robberies and drug busts to high pork prices and new and “bad” teachers, this is the final list of 2019 of the types of content that are commonly shared on Lao social media.

A status update post that writes “Guys, how can we prevent these fatal accidents involving ten-wheeler trucks?” has gone viral last Sunday, due to the high number of accidents that involved large transport vehicles in recent weeks.

Drug enforcement authorities raided a house suspected of being a base of drug operations in Oudomxay, according to a report by Lao Security News. Illegal contraband and drug production equipment were confiscated and five people arrested.

Sonethep “Sern” Phommathep won over the social media crowd by winning first place and second place in the Class C and Class B divisions, respectively in the PTT Station BRIC Drift Attack 2019 in Buriram, Thailand.

A prime ministerial order was released this past week announcing that the government will accept a further 2000 new employees. The majority of the quotas will go to the Ministry of Education as it prepares to accept 1040 new public school teachers.

Merry Christmas everyone, from Lao rice field.(I don't know who made this video, received from sister Duangmala Phommavong, who owns one of Laos major tour companies EXO, via messenger and could not trace back to the origin, and I thought it's just fantastic and just wished to share.)

The Gift of Giving

In the spirit of giving, digital praise was showered upon generous individuals who donated cash, winter jackets, socks, and educational supplies to a disadvantaged school in Meuang Feuang, Vientiane Province.

Mahosot Hospital issued a notice informing the public that Mahosot surgeons and experts from the Netherlands’ Bridge the Gap Foundation will be organizing a free clinic that aims to perform surgery to help people affected by cleft palate, noma (a mouth disease caused by poor dental hygiene), and other disfigurations of the face and mouth on January 12-17 of 2020, starting at 8am at Mahosot Hospital (Vientiane Capital). Another clinic will be held on January 19-23 of 2020 in Xieng Khouang Provincial Hospital, starting at 8am.

Pork Prices On the Rise

The Vientiane Department of Industry and Commerce has ordered that the prices of food items, especially during the New Year celebrations, should not exceed the following:

Authorities are on the lookout for an unidentified person who robbed multiple internet gaming shops. CCTV footage of the armed robbery of one shop can be seen here.

Finally, the last story on the list could easily be Lao social media’s biggest controversy this year. The latest official story based on the written MOU testimony from the village head is as follows: a primary school student in Champasak was accidentally struck with a meter stick during a cleanup session organized to clear the school grounds after the previous evening’s festivities. The stick happened to have a used nail attached to it. The student suffered a bloody eyebrow and was taken to the hospital where she was vaccinated to prevent tetanus. The school’s management and parents have confirmed that it was an accident and both apologies and reparations have been made. All parties are on good terms.

A few days before the official statement, several Facebook Pages and anonymous accounts posted that a teacher had struck a child because the latter was exhibiting mischievous behavior. Another post vehemently refuted the story and dismissed it as fake news, claiming that the teacher was based in Luang Prabang while photos of the injured child were taken in Champasak.

The teacher who suffered this libel publicly posted on her Facebook account that she had no connection to the incident whatsoever, arguing that screenshots depicting heated conversations between her and several users were either completely doctored or resulted from Facebook hacking.

When the “news” first broke out, social media users were extremely quick to judge and lash out at the supposedly ill-tempered teacher through horrendous namecalling. Shares of the incident garnered thousands of emotionally charged shares and comments, testifying to the reality of misinformation and emotional manipulation on social media.

Interestingly, while the origins of this particular social media frenzy remain unclear, there is evidence to believe that the digital scandal was deliberately being leveraged by certain actors with agendas that go beyond personal reputation destruction and click-baiting. This could very well be the beginning of coordinated disinformation campaigns in Laos.