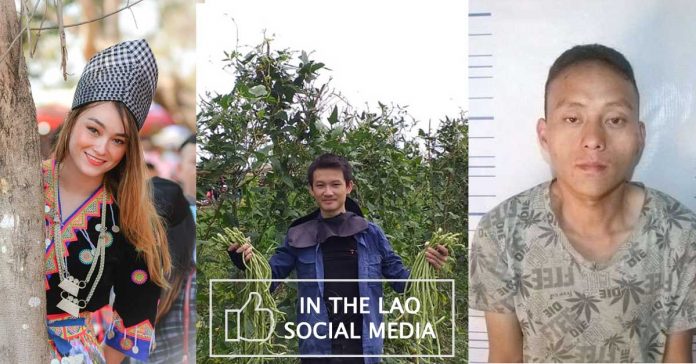 It’s that time again when the Laotian Times brings our readers a round-up of some of the most shared social media topics this past week, based on reach and engagement on Facebook. From a gruesome case of patricide to violence against shopkeepers, to gorgeous people with beautiful hearts and a student struggling to make ends meet, this list gives readers an overview of the range of topics that are shared in the Lao social media.

Several photographs of a Hmong lady posing playfully for the camera amidst festivities in the KM52 area have gone viral. Comments that flooded the Tholakhong Facebook Page were primarily focused on her striking facial features which, while overwhelmingly positive, pertained to whether or not she was of mixed heritage.

Maniphone “Jiap” Singhaxayaseng, finalist and winner of the People’s Choice Award in the 2019 Miss Laos Pageant, generously donated supplies and winter wear to a disadvantaged school in Kornoy Village, Oudomxay.

Despite the issuance of an order prohibiting opportunistic price hikes by the Vientiane Industry and Commerce, prices of pork continued to rise during the New Year period. One potential reason included unscrupulous meat wholesalers colluding to purchase meat in large bulks and increasing prices for the retail end of the supply chain. Another equally probable reason has to do with the practices of the slaughterhouse factory owners, who increased the price for both wholesalers and small retailers, making it impossible for them to make a profit without passing on the increase in price to consumers.

In a CCTV video that has social media up in a frenzy, a foreign man can be seen striking an elderly female shopkeeper. The man has been arrested, but no further details are known. Social media comments lashed out at foreigners and tourists for this heinous behavior, even as many foreign expatriates have publicly condemned the act.

Lao social media users very much appreciated the lengthy New Year address broadcast by state radio and transcribed by Chinese Radio International (CRI). In the address, the Chinese President described the successes of the past year, while promising to tackle issues in 2020.

Mido Khounladom, a student in his third year at the National University of Laos (NUOL), narrates an inspiring story of how he has been paying for his education. After leaving his village in Vientiane Province, Mido could not afford to pay his own rent and therefore sought shelter at Phonphanao Temple. After having been admitted into university studying agriculture, Mido pleaded with his professors to allow him to use the school grounds for small-scale vegetable farming. He then used the proceeds from sales of his produce to cover his tuition fees.

It’s All About the Lao New Year (Pi Mai Lao)

It’s only been a few days since the international new year has passed, and Lao social media users are already gearing up for the Lao new year in four months’ time. Residents will be excited at the prospect of four consecutive days off work as Pi Mai Lao falls on the 13-16 of April, not including the two preceding weekend days. Moreover, some companies may even give the 17th of April (which falls on a Friday) off. If so, that would make for an impressive and rare nine days of fun festivities.

Infuriated by his father for reproaching him for the use of illegal drugs, Peelee, 22, took a large piece of wood and struck his father over the head, causing him to fall to the ground. A second blow was delivered by Peelee, who was under the heavy influence of drugs. His 65-year-old father, Xaychialee, died from the blow. Police have Peelee under arrest and he currently awaits sentencing. Lao social media erupted in rage as users called for the death penalty for the ungrateful son, while many others decried the negative impact of drugs on the social fabric of society. The incident dates back to November 2019 in Oudomxay.