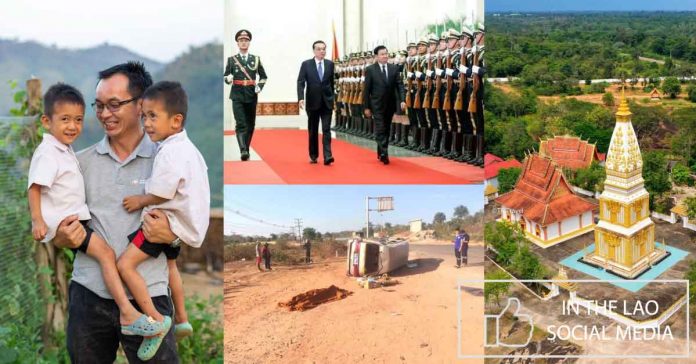 It’s that time again when the Laotian Times brings our readers a round-up of some of the most shared social media topics this past week, based on reach and engagement on Facebook. From a horrible case of uxoricide-suicide and burning vans to charismatic leaders and selfless eye doctors, this list gives readers an overview of the range of topics that are shared in the Lao social media.

Lao social media users gave their two cents about the ongoing US-Iran conflict. Like much of the world, a mixture of sentiments was expressed. Most tended towards wishing for a peaceful resolution while others were locked in a singleminded viewpoint of decrying either American hegemony or Islamic radicalism. A substantial number, however, chose to be playful and say something along the lines of “let the two leaders of each country battle it out in the boxing ring so that their people won’t be harmed.”

We are all accustomed to hearing about the great atmosphere and activities surrounding the That Luang Festival in the capital city held in November each year. But few of us have heard of another great festival celebration at That Phonsan in Bolikhamxay (6-9 January). It has been reported that the festival featured over 700 monks, a cultural competition, an ODOP (One District One Product) expo with over 60 shops, and famous on-stage musicians.

When a top leader makes an official visit abroad, Lao people love it. When Prime Minister Thongloun visited China and is shown walking along a line of soldiers and shaking hands with Chinese Prime Minister Le Keqiang and President Xi Jinping, online locals react favorably. A genuine sense of pride takes over the average online citizen when they see a neighboring country’s leaders, especially those of a country of enormous political and economic stature like China, take the time to greet their leader.

This next incident involves a burning van near Chao Anouvong Park, Vientiane Capital. As usual, the news was shared wildly with comments focusing on the poor quality of the video, and whether or not there were any casualties. Details of the origins of both the fire and the van are currently unknown. However, one user managed to zoom in on the license plate and humorously alluded to a common Lao superstition that it was nature’s way of telling him the day’s winning lottery numbers.

In a mouthwatering post, KhuviengKFC, the beloved Lao fried chicken brand, launched its fifth branch in Hongkha (Vientiane Capital) and is selling any “tam” (tossed spicy Lao salad with a select vegetable or meat ingredient and fermented fish sauce; tam mak hoong such a salad using unripe papaya) for only 10,000 kip. The post’s popularity shows Lao people’s incredible fascination with fried chicken (typically drumstick), Pepsi, and tam salads of all varieties (using fresh raw crab, cockles, and pretty much anything that can be found in the market).

A man who has been wanted for the alleged murder of his own wife three day ago in Khoutsambart Village has been found dead in Huana Village (Xaythany District, Vientiane Capital). Police have concluded that he shot himself. More details to come regarding this uxoricide-suicide case.

Upper secondary school student Nanthakon surprised audiences and won the heart of judges with his solo vocal performance of “Ngam Meuang Lao” at the Sisattanak cultural competition. His admirers presented him with ovation and in typical Lao fashion, a garland made entirely out of cash notes. The average social media user was mostly supportive while several harder-to-please voice champions conveyed their critique on the performance but ultimately wishing the youngster well.

Lao singer Noy Thaithulee sings a song written in English calling on the world’s leaders to stop all conflict and think about their peoples. With its simple yet powerful lyrics and the gripping images of the casualties of war and poverty, the song was met with great online reception.

Have you ever seen a lottery draw event? It’s one of those LIVE events that, unsurprisingly, get huge amounts of engagement. Lao lottery buyers tend to cheer for their favorite lucky digits often taking the names of animals (e.g. lek ma refers to digits of the dog; lek peung refer to bees), as officials proceed to randomly draw the numbers.

Doctors and healthcare professionals have gained a poor reputation on Lao social media in the past few years as complaints of bad service and ill-treatment have surfaced. Reversing that trend is ophthalmologist Phetsamone Indara, Laos’ first Eye Health Hero. With 16 years of experience as an eye doctor, Dr. Indara caught the public’s attention for setting aside two months a year to visit remote villages and delivering eye care to people with limited access to health services. Through the Australian NGO Cooperation Program (ANCP), the government of Australia supported the good doctor, working with the Fred Hollows Foundation. The Fred Hollows Foundation has helped more than 106,000 people in Laos see again, thanks to the commitment and tireless work of eye health heroes such as Dr. Indara. It is expected that this prevention program will continue to address avoidable blindness in Laos.

25 Years Since the Passing of Souphanouvong

Yortkeomany Souphanouvong, daughter of the first President of modern Laos, Souphanouvong, paid online homage to the memory of her father on the 25th anniversary of his passing in January of 1995.

In the afternoon of January 11th, a six-wheeler truck collided with a van on 13 South Road in Veun Village (Thakhek). One Buddhist monk died, while many others were badly wounded, prompting many on social media to question the frequency of accidents that occur with large transport vehicles. Many were quick to post anecdotes about past truck drivers being known to take drugs, to their own peril and that of others. Most wished for a speedy recovery to the monks in critical condition and for the deceased monk to rest in peace, while others criticized the low enforcement of regulations that permit these trucks to use the road during the daytime.