SINGAPORE – Media OutReach – 5 November 2021 – Three years after its MainNet launch in 2018, TRON has built a full-fledged ecosystem through its sustained efforts. It has expanded into many competitive fields including DeFi, NFT, stablecoins, and distributed storage, outdoing Ethereum and EOS in terms of metrics on many fronts. With its rapidly rising clout across the globe, TRON has emerged as a mainstay in the industry. 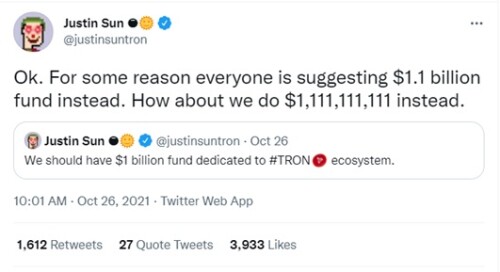 TRON founder Justin Sun recently tweeted about his plan to establish a $1,111,111,111 (roughly $1.1 billion) fund to power the growth of the TRON ecosystem. It is reported that the fund will be used to provide developers with more efficient and affordable developing tools. Meanwhile, it can also allow the protocols in the network to yield more returns while giving users access to transactions at the lowest costs.

In effect, the TRON ecosystem has seen its heyday under Justin Sun’s leadership and has established itself in a number of popular fields, including DeFi, NFT, and stablecoins, etc.

In the most popular DeFi race, TRON has extended its reach to a dozen of fields, including stablecoins, wallets, lending, exchanges, storage, cross-chain assets, liquidity mining, oracles, shielded transactions, social-networking, and games, among which JustLend and JustSwap rolled out by TRON have risen to be two hits.

NFT, the hottest race of the year, is a space where Justin Sun and TRON will surely not miss. From earlier this year, Justin has been raking in world-class art pieces and works from established contemporary artists one after another. His collections, with a combined worth of over￥300 million, include “Femme nue couchée au collier” by Pablo Picasso, “Three Self-Portraits” by Andy Warhol, and “Ocean Front” by crypto artist Beeple. To facilitate innovation in NFT, Justin later donated most of his collections to APENFT Foundation, an organization specialized in registering artworks as NFTs on blockchains, which has since taken the NFT industry by storm.

Besides launching the first NFT standard TRC-721 in March, TRON has improved the world’s largest distributed storage system BTFS, providing a comprehensive and efficient infrastructure for transforming artworks into NFTs on blockchain. It is also proactively making inroads into GameFi and NFTFi.

Justin has also been leading TRON to go all-in on stablecoins. At present, TRON supports the on-chain circulation of major stablecoins such as USDC, USDT, TUSD, and USDJ, and the daily transfer volume of TRON-based stablecoins has topped $10 billion multiple times already.

Lately, TRON and BitTorrent officially launched the cross-chain scaling solution BitTorrent Chain (BTTC) with its Testnet enabled. As BTTC goes live, TRON will draw more users from other chains to its increasingly prosperous and diverse ecosystem, unleashing even greater potential.

It is not hard to tell that as one of the world’s top three public chains, TRON, boasting over 59 million users, has been continuously expanding its ecosystem under Justin Sun’s leadership. In view of TRON’s strong competitiveness, it is believed that the incredible potential of TRON will be unleashed in the near future, giving everyone engaged in this blockchain revolution invaluable rewards.