Mr Sayaveth Phanpaseuth (M14) from First Modeling Lao has been announced as the overall winner of the Wow 30 Hottest Bachelor Dream in Vientiane project 2 after the contest final round on Sunday at Vientiane Centre.

Mr Sayaveth Phanpaseuth received 5 million kip in prize money, will appear on the cover of Wow Magazine Society , and was given a Galaxy 6s mobile phone from LTH, as well as Vientiane-Bangkok air tickets from Thai Airways.

He also received a one year membership at Sengdara Fitness worth 5 million kip, a 5 million kip gift voucher from CNB, a Vientiane Centre card worth 1 million kip, the use of Clear products for one year, and 2.5 million kip from Sentilut product.

Mr Sayaveth Phanpaseuth will also have the chance to further his name on the Lao entertainment scene as well as join fashion industry events in neighbouring countries over the months ahead.

In other prize winners, Mr Photogenic was nominated by TVLao as Mr Sunny Phongphilath (M20), who received prize money of 4 million kip.

He said the project had attracted the interest of many young people and finally, 30 aspiring models were selected to take part in the competition, which included modeling and fashion shoots here in Laos and also neighbouring countries.

Mr Suwat also thanked all the sponsor companies for their support and for giving aspiring young male models the chance to take to the catwalk and strut their stuff. The final round of the contest attracted a large audience of followers both male and female, who cheered on their favourite hot young men.

It is expected that some of those on stage will go on to be among the rising stars of the Lao entertainment world in the years ahead. 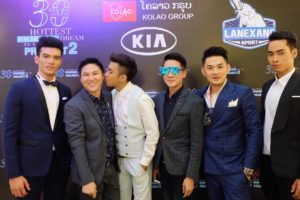