Fresh from a maiden victory in the Lao Premier League, Lanexang United football club are on the verge of regional success after upsetting Thai giants Buriram in the first leg of the Mekong Club Championship.

Only a 93rd minute equaliser in the former Burmese royal capital of Mandalay last week stymied an astonishing attempt by little known Laos outfit, Lanexang United, to set what would have been a new world record for the most number of consecutive wins by a football team – anywhere on the planet.

In the same week that Lanexang’s run ended at 24 (although their undefeated streak continues) Welsh club The New Saints actually surpassed the previous mark set 44 years ago by Dutch giants Ajax with their 27th straight win, but there was little time for moaning at the Vientiane-based side as their next match produced arguably the best result in their short history.

That was a 1-0 win at home in the first leg of the final of the Mekong Club Championship against none other than Thai heavyweights Buriram United, and has continued the rapid ascension of the team known as the ‘Million Elephants’ to the point where they are emerging now as not just a domestic powerhouse, but indeed as a force to be reckoned with regionally. 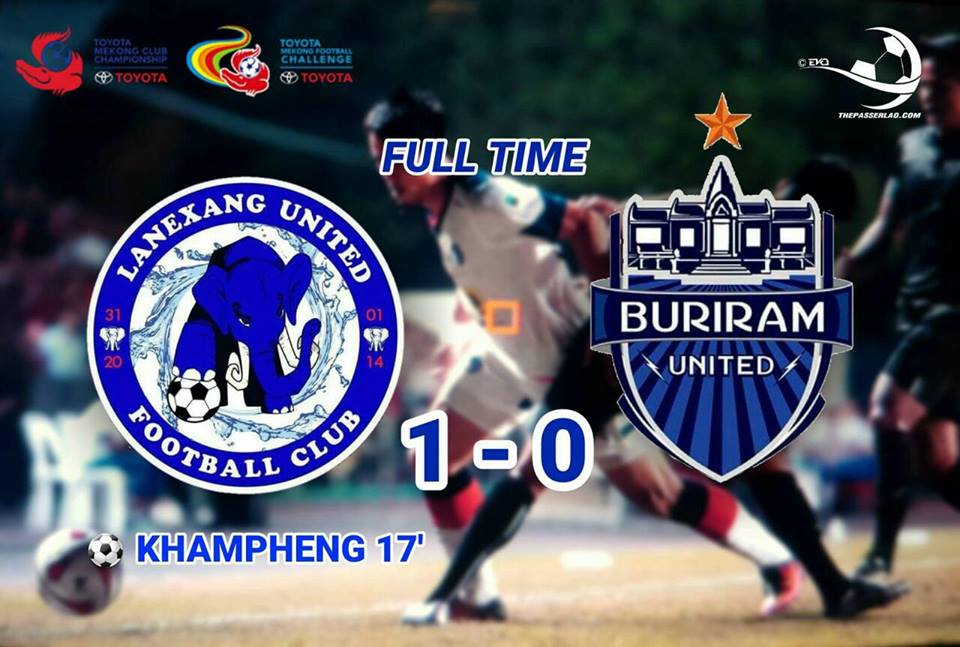 Having won the Lao Premier League for the first time in their history in 2016 few gave Lanexang a chance of success in the MCC against leading clubs from Vietnam, Cambodia and Myanmar, but as it stands they are on the verge of winning the entire tournament ahead of the second leg with Buriram this coming Sunday.

On the surface the rise has been a warp-speed one for the team from the Lao capital. but in reality it’s been a methodical, calculated process – flush with heavy investment, a committed backroom staff and a talented, youthful, playing group that’s seen the club emerge as the new standard-bearers for football in the country.

The story began with the takeover of the club by businessman Phanthachith Inthilath a little over two years ago. In that time he’s poured an estimated US$15 million into the organisation, headlined by the construction of a brand-new stadium, an indoor training and recovery facility, a pool and a gym.

Just as importantly though in a nation beset by match-fixing and other problems away from the pitch, the Chairman insisted that Lanexang would do things the ‘right way,’ and in an effort to build their club from the ground up they’ve also been forced to play a very young squad – the average age of the team that defeated Buriram just 24.

One of the key appointments made by the club was to bring in former Australian youth international Kaz Patafta, who at just 28 years of age is one of the youngest General-Managers anywhere in Asian football and who has done a tremendous job in overseeing the transformation of the club.

As he exclusively told FOX Sports Asia, the aim is for Lanexang to become one of the leading Southeast Asian powers – and they’re not that far away from achieving that goal.

“We want to put Lao football on the map and we want to do it the right way.

“In terms of the bigger clubs in the region we’re aiming to be considered on the same footing as those teams from Thailand and elsewhere and we want to do it by promoting young Lao talent and stamping out the negativity that’s surrounded football in the country recently.”

Despite his tender years, Patafta – whose mother is from Laos – is quickly emerging as one of the sharpest young administrative minds in the region and backed by a law degree that he completed following the conclusion of his playing days the former captain of the Benfica youth team was thrilled by what he saw in the first leg of the MCC final.

“We don’t have the support of some of the other clubs in the region – it’s really just our President doing everything by himself – and we certainly can’t compete with the budget of a club such as Buriram but what we can do is do things in what we believe is the best way that will give us success.

“We’re using the latest technology to scout and analyse our opponents, we have a wealth of data and tactical information on our opponents and this is helping our success on the pitch.”

That too is translating to mass support off the pitch where, even as they were forced to play the MCC final away from their regular home venue, they still managed to sell out the Chao Anouvong Stadium with 10,000 supporters cramming into the tiny venue and another estimated 3-4,000 milling around outside, trying to climb fences and trees just to get a glimpse of the new dominant force in Lao football.

The club also completely sold out their supply of merchandise and is expected to take a healthy travelling contingent of supporters to Thailand for the second leg.

Whilst the staff behind the scenes have been working overtime to get the club to this level, on the pitch much of the success has been down to a crop of little known players who the club has either developed itself or plucked from relative obscurity elsewhere to form the nucleus of a technically sound, hard-working, outfit.

One of those is young Australian defender Aaron Evans, who never played professionally in his homeland but who has grown considerably to emerge as a leader at the back after being handed an opportunity by Lanexang.

As the 22-year-old told FOX Sports Asia, such is the self belief in the side at the moment that they’re confident they can keep their astonishing undefeated run going and knock off the might of Buriram in the second leg to claim the regional title.

“We’ve certainly exceeded all expectations – even my own – in reaching this stage but what we’ve also shown is that these results are fully deserved and are not lucky in any way.

“We might not have any superstars in the team but what we do have is skill, ability and a very strong team spirit where each player works for each other and that hard work is paying off in the results.

“For me, from a small city in Australia, to be on this stage is unbelievable but we want to keep this dream going and we’re confident that if we keep playing to our strengths we can beat Buriram in Thailand.