Lao leaders’ luxury cars are expected to be auctioned next month.

The first auction will see bidding on six BMW 7 Series vehicles, and five Mercedes-Benz cars that were driven by Lao leaders.

Party and government leaders have agreed to forgo luxury vehicles as part of a new strategy to encourage frugality and lead by example.

A Decision was signed last week to return all BWM and Mercede-Benz vehicles in the fleet purchased for personal use by individual leaders (with blue license plates). These vehicles are to be sold at an auction and replaced with less luxurious brands, such as Toyota.

A total of 36 Mercedes-Benz 15 S-Class, and 21 E-Class vehicles were purchased for use in state affairs, and were also provided to high-ranking officials.

On top of this, a further 11 BMW 7 Series cars were purchased for use by Party Politburo members, including those who had already retired. These will be more difficult to reclaim as many were offered to retired party members as gifts.

According to an article by the Vientiane Times, Vice President Phankham Viphavanh said in a meeting on Friday that the BMW’s given to retired leaders will not be reclaimed.

An agreement has been made to hold the first auction of luxury cars early next month, with eleven vehicles to be showcased at the National Convention Center.  These are to be sold first to make an example.

Following this first auction, a further twenty luxury cars being used in other provinces around the nation will be reclaimed. 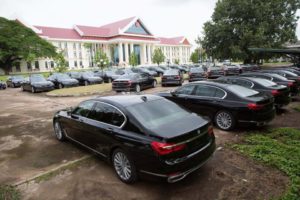