December 4-9 – The twelfth session of the Intergovernmental Committee for the Safeguarding of the Intangible Cultural Heritage took place on the island of Jeju, South Korea.

Over the six days, the twenty-four members of the Committee, elected by the General Assembly of the 2003 Convention, discussed a number of cultural heritage practices that needed safeguarding around the world. One of these issues included the phenomenon known as Khaen music. It had been decided that Khaen music was an instrumental practice belonging to the Lao people and has been inscribed in the 2017 List of Intangible Cultural Heritage in Need of Urgent Safeguarding by UNESCO. 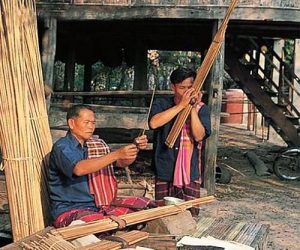 The UNESCO site states this about Khaen music:

The khaen music of the Lao people is played with a mouth organ that resembles panpipes but made with bamboo tubes of varying lengths, each with a metal reed. The player blows into the instrument through an air chamber and the sound produced depends on the size of the tube. Khaen music is popular in all regions of the Lao People’s Democratic Republic due to its harmonic richness. It is usually part of village festivals and it is customary for people listening to it to become active participants in the songs and dances, rather than merely spectators. Khaen music is an integral part of Lao life that promotes family and social cohesion. Thanks to the use of bamboo, the practice is also linked to natural agriculture and healthy lifestyles. Families play an important role in transmitting the art and khaen player associations exist in many local communities where young people can learn the art. To maintain the practice in spite of lifestyle changes – including urbanization – several local communities, associations and groups have begun various initiatives to consolidate and promote it through formal and non-formal education. In 2005, the Association of Khaen Arts was established and various festivals are organized to promote and enhance the art.