A lightning strike is reported to have killed 27 cows of local villagers in the District of Kenethao in Sayaboury on Thursday morning.

Earlier Wednesday evening, a hailstorm caused damaged to the roofs of 80 households, including 70 houses in Phawai Village and 10 houses in Khangphanien village in the District of Nonghed in Xieng Kuang.

So far, no human casualties have been reported. 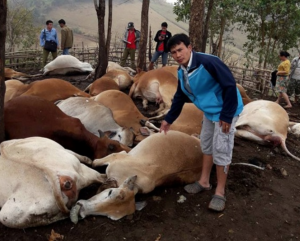