Social media celebrity Sinon Loresca has recently arrived in Vientiane and has stirred up a lot of commotion in its sleepy capital with his infamously provocative catwalk, sensationalized by his popular Instagram account which has over 440,000 followers and his Facebook Page with over a million LIKES.

Dubbed the “King of the Catwalk,” Loresca has a tremendously chiseled body and the perfect tan to accompany it. He has been hailed as one of the most talented gay men to strut in high heels in the most mundane of places including airports, beaches, sidewalks and most recently at Patouxay Monument.

By some estimates, the “Patouxay Catwalk” video, in which Loresca is seen walking his dog in high heels in front of the Patouxay Monument in Vientiane Capital, has been viewed more times in one day than the official Laos Simply Beautiful video has in several weeks.

Apart from Patouxay, Loresca visited a number of Vientiane’s famous destinations including That Luang. 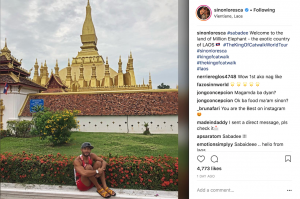 He went to lift weights at Sengdara Fitness. 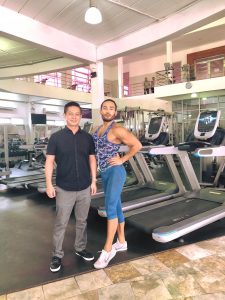 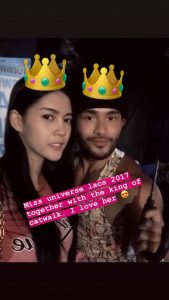 While it is safe to say that the King of the Catwalk’s visit to Laos was neither staged nor officially sanctioned by the Visit Laos Year Campaign 2018, the amount of publicity generated by his social media posts and videos on Facebook and Instagram has most certainly brought much needed tourist attention to Laos.