Save the Children launched a new global report, ‘The Many Faces of Exclusion’ where it ranked countries based on a range of indicators related to childhood.

More than 1.2 billion children – over half the world’s children – live in countries affected by conflict, widespread poverty or discrimination against girls, significantly reducing their chances to learn, grow or reach their potential.

Compared to last year, the overall situation for children appears to be more favorable in 95 of 175 countries. This is excellent news – showing that investments and policies are working to lift up many of our children. But the index also shows progress is not happening fast enough, and conditions appear considerably worse in about 40 countries. 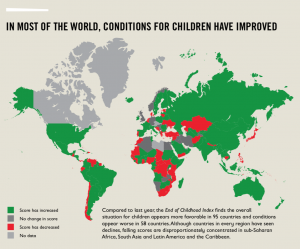 Laos performs poorly when it comes to stunting, under 5 mortality, child marriage and adolescent pregnancy. Laos fell two places to 132nd out of 175 countries, behind regional neighbors Thailand (85), Vietnam (96), and the Philippines (104). Despite significant increases in the number of people living above the poverty line, Laos has 43% of stunting among children, according to the report, and 6% child mortality incidence. Almost a quarter of girls under 19 are married, and 6% of these girls have children. 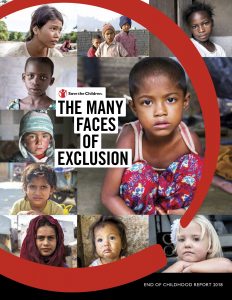 “Stunting and child mortality remain big challenges for Laos. Save the Children works with the government of Laos and with the support of donors such as USAID, the European Union and the Australian government to reduce these numbers,” Save the Children Lao Country Director Deborah Leaver said.

“Save the Children has been working in Laos for more than 30 years, and we’ve seen a lot of improvements in this time. But there is a lot more work to do, and we will continue working to improve the situation for children in Laos.”

Apart from Laos, the report includes a ranking of 175 countries where childhood is most and least threatened as a result of poor health, malnutrition, exclusion from education, child labour, child marriage, early pregnancy and extreme violence.

Singapore and Slovenia both rank first, with Norway, Sweden and Finland rounding out the top five. Eight of the bottom 10 countries are in West and Central Africa, with Niger ranking last for the second consecutive year. 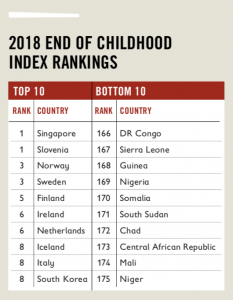 Save the Children is calling on governments around the world to ensure that no child dies from preventable or treatable causes or is subjected to extreme violence; is robbed of a future as a result of malnutrition, early or forced marriage, early pregnancy, or forced labor; and that they have access to a quality education.