Laos-based medic Doctor Hiromi Obara from Japan is one of twenty women practitioners in the field worldwide awarded in 2018 by the International Federation of Gynecology and Obstetrics’ (FIGO) at its World Congress in Brazil. The recognition comes amid contributions to improving the health of women in low and middle-income countries and other resource-limited settings.

For award-winning medic, Dr Hiromi Obara, the connection between the two places and their people is clear when it comes to maternal and child health.

Growing up in this part of rural Japan helped put this women’s reproductive health specialist on a long path to the international impact that has now seen formal recognition. Her inspiration to pursue a career in this critical field of medicine was born of experiences of people in her homeland, whose geographically remote and less populated parts have long-faced the challenges of deficits of access to medical care due to distance and related issues.

Her career since has seen her obtaining her MSc in Epidemiology at the London School of Hygiene and Tropical Medicine to contributing in joint efforts with counterparts to improve access to quality care for rural and remote communities in the Southeast Asian nation of Laos and beyond.

Dedication and capacity developed over the intervening years has led to present focus on the health of women and children in Laos. In this south-east Asian nation, she actively supports policymakers and practitioners to assist more women and children in rural and remote parts to achieve better health outcomes thanks to increased access.

Serving as a Health Policy Advisor to Laos’ Ministry of Health on behalf of Japan International Cooperation Agency (JICA), Dr Obara is working closely with fellow officials and programme managers in the country to improve access to the services provided by professional health personnel nationwide.

Now, these efforts have been formally recognised by her fellows in the field. FIGO, a peak body representing national societies in some 130 countries worldwide, awards women obstetricians and gynecologists, predominantly from low- and middle-income countries, who have contributed significantly to the improvement of health care for women in their daily practice or via research. 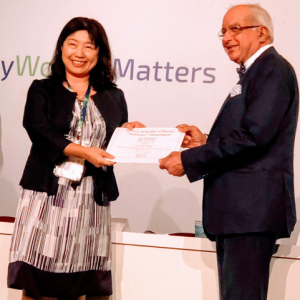 Among the twenty FIGO awardees announced at the triennial global congress held in October in Brazil, Dr Obara was one of a handful to hail from a developed country.

Asked what she is most proud of, it’s the impact of the results of the work of her counterparts and the achievements they have been able to make with women, their children, families and communities.

“Compared to other countries, the situation in Lao PDR was notorious concerning inequity in access to Maternal and Child Health Care, as recently as 2011/12.”

“However, thanks to the government’s commitment, investment in reproductive, maternal, newborn, child health has increased by various means such as the development of midwives, free MCH access schemes, resulting in improved pro-poor access to maternal and child health at scale.” 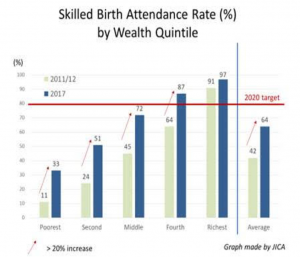 Credit for such improvements she ascribes primarily to efforts of counterparts in the ministry at every level, from leadership to those delivering lifesaving and protecting services across the country.

“My counterparts (MoH officials) have strong ownership and leadership which,  together with the inputs from JICA and other Development Partners, has contributed to the recent health outcomes, in particular, pro-poor and equitable access to maternal and child health services.

“Without enough dialogue, it is not possible for me to offer technical support. As such, I appreciate their kind collaboration. I have learned a lot from MoH officials here in the Lao PDR.”

On secondment from the National Center for Global Health and Medicine (NCGM) Japan, Dr Obara has over 18 years’ experience providing technical, programmatic and management support in reproductive, maternal and newborn health (RMNH).

Her career has since seen her contributing across several locations in the Western Pacific Region and beyond, focusing on resource-limited settings in particular.

At home in Japan, she has served as Deputy Director of the International Affairs Division of the Ministry of Health, Labour and Welfare and as a doctor at Jichi Medical University Hospital.

Apart from Laos, she has also worked as a reproductive Health Medical Officer in World Health Organization (WHO) Regional Office for the Western Pacific and as Chief Advisor to JICA’s MCH project in Cambodia.

Dr Obara counts among her areas of expertise country policies, strategies, plans, clinical guidelines, and efforts to improve financial access to and equitable access to and quality of care. Her efforts include contributing to regional and global meetings as an RMNH expert and to WHO publications as a member of several Guideline Development Groups and the Independent Review Group.

Such contributions have seen her well placed to offer advice to health authorities in how to best conduct maternal death reviews, improve newborn care, eliminate unsafe abortions, develop policy strategy frameworks and conduct monitoring both at country and regional levels.

Looking forward, Dr Obara is optimistic about the trends and prospects for better access and outcomes for women and their children in Laos as the developing nation closes in on its 2020 goals.

To achieve these goals and continually improve the health outcomes for women and infants in 2020 and beyond necessitates appropriate funding allocation to the sector in terms of facilities, equipment and medicine as well as providing targeted incentives for ongoing improvement of human resource capacity to deliver result-based, family-centered services and clinical care countrywide, Dr Obara said. 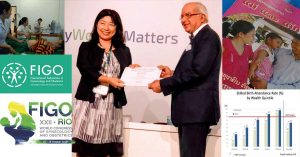