The president of the International Petanque Federation has spoken with the Laotian Times to clarify the trophy handover incident.
The bizarre incident, which caused a stir in Lao social media, was caused by a simple misunderstanding and sudden changes to the scheduling of medal presentations on the part of the event organizers.

Mr. Claude Azema, President of the International Federation of Petanque, or Federation Internationale de Petanque et Jeu Provencal (FIPJP) in French, presented medals to the winning teams at the conclusion of the World Petanque Championships in Cambodia, in which the Lao team took second place.

Following the presentation of medals, a trophy was presented to Ms. Bolivak Thepphakan, who took her team to second place in the tournament. Rather than handing the trophy to her directly, Mr. Azema placed it on the floor.

He explained that traditionally the protocol of the World Championships designate the presentation of medals at the podium, in line with that of the Olympic Games and the SEA Games. However, the Cambodian hosts of the championship made a sudden, last-minute change to the schedule, requesting that trophies be presented at the podium.

This presented Mr. Azema with a dilemma, as athletes already had their hands full holding medals and national flags for photographs.

“I was called upon four times to deliver silver medals, and also the corresponding trophies, one for each athlete and one for the coach,” said Mr. Azema in his letter.

“Each time I advised the athletes to think of putting the cups and the FIPJP trophies on the ground in front of them so that their medals would be clearly visible in the photos, especially since most of them also held their national flag with their hands.”

“I systematically went around the four teams already on the podium to congratulate them and give them the same advice. Everyone will be able to see that most teams have followed this advice practically on all the podiums,” he said.

Other teams did indeed place their trophies on the floor, however, the photograph of the Lao team receiving the trophy at their feet was misunderstood and, taken out of context, quickly went viral. 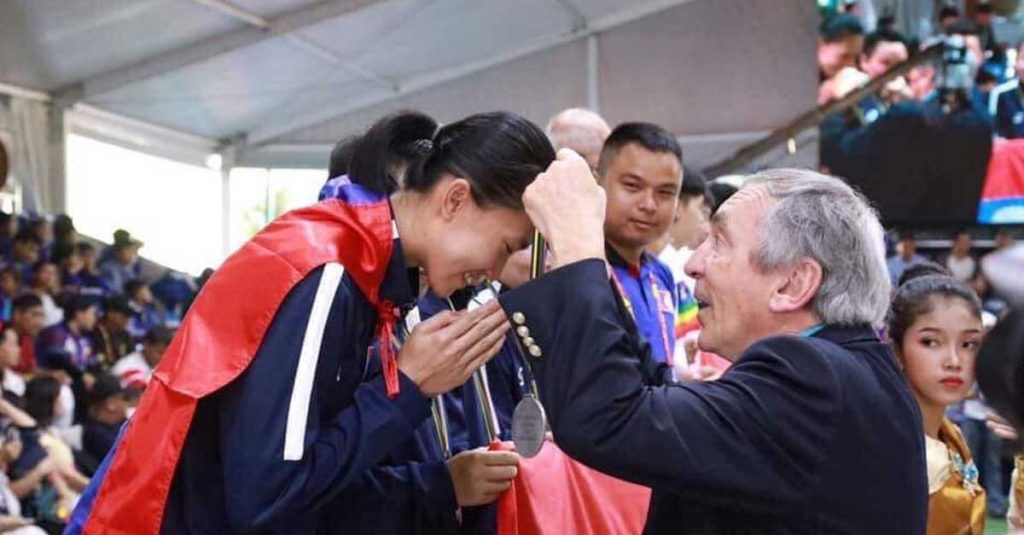 According to Lao custom, the feet are considered the lowest part of the body, and leaving a trophy at the feet is considered disrespectful.

Mr. Azema was just as surprised as anyone when asked to hand the trophies over at the podium when typically trophies are handed over at the closing meal.

“Everyone knows for a long time in the world of Pétanque and elsewhere that I have the greatest respect towards all the players, whatever their origin and their level, and that I even manage to have cordial relations with many of them.”

“Nevertheless, if you consider that I did not behave well on this occasion, I beg you to understand the reason behind this incident and accept my apology from the depths of my heart. It is not my intention, nor has it ever been, to cause any offense, and I am really grieved to have been so badly reflected in social media.”

“I will also be present in Manila for the Petanque events of the SEA Games, and I hope to be able to give one more medal or two to your players – there will be no trophies! – and I hope that the Lao team will discuss with their shooter (with an interpreter please) to explain if necessary and together make a beautiful photo.”

Mr. Azema went on to say that he has ensured that Laos will be part of the teams invited for the 2020 petanque championships that will take place in France in October.