BANGKOK, THAILAND – Media OutReach – 1 June 2021 – Vesync is one of the market players in the small home appliance online market in the United States. Currently their products are sold to users in a number of countries, primarily the United States, Canada, the United Kingdom, Germany, France, Spain, Italy and Japan. Vesync products are sold under three core brands, namely, Levoit, ETEKCITY and Cosori. Levoit air purifiers ranked first and its Cosori air fryers ranked second in their respective categories, both in terms of retail sales generated through Amazon in 2020 in the United States. Its Levoit brand continues to grow globally and set out to enter Thailand in 2021. At present, you can buy their Levoit Air Purifiers from online Shopee and Lazada stores. 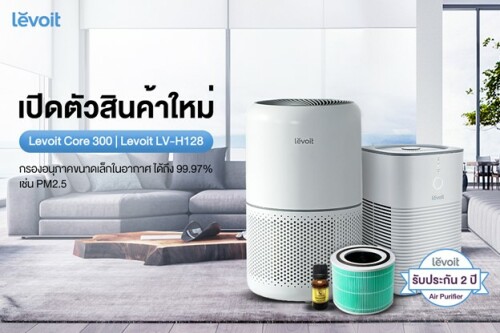 Recently, Vesync announced that offers two cost-effective Levoit air purifiers in Thailand, a high-performance air purifier Core 300 with 3 specialized replacement filters, you can choose from original Filter, Pet Allergy Filter, Toxin Absorber Filter based on your needs, as well as offers its new product LV-H128 desktop air purifier with fragrance sponge, at a compact and portable, users can add their favorite essential oils to reinvigorate the room with soothing and stimulating fragrances. Now there is a promotion on their Shopee Levoit Official Store, users who buy Core 300 air purifiers can get one extra blue Toxin Absorber Filter, and users can get essential oils for free if you buy LV-H128 air purifier.

Vesync Co., Ltd (the “Vesync Co.”) is a market player for small home appliances within the United States’ online&offline market. Beginning in 2012, as Etekcity, our initial brand was soon accompanied by Cosori and Levoit. As each began to flourish, we turned our attention to developing an IoT platform.