The Xaysana drug ring is currently one of the hottest topics in Southeast Asia. Regional social media is aflame with updates on Xaysana Keophimpa, the alleged drug lord from Laos recently arrested in Bangkok. The Xaysana sensation has spread like wildfire across Laos and Thailand, and while arrests continue and connections to Thai celebrities come to light, most of the official Lao media remains curiously silent.

Who is Who? Here Are The Big Names of the Case: 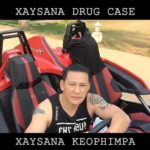 Xaysana Keophimpa hails from Khammouane province. Much of his background is unknown, however he quickly rose to a high position in the drug network to which he has been linked. After the arrest of Xaysana, his personal Facebook page remained accessible to the public, with his ostentatious lifestyle and links to celebrities on display for all to view. 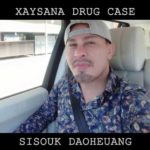 Sisouk Daoheuang is a wealthy individual who owns a horse farm that breeds and sells pedigree horses reaching up to 4 million baht. He holds a concession on the Lao government lottery, and is a shareholder in a supercar business spanning both Vientiane and Nong Khai.

Sisouk is a known associate of Xaysana, and some reports have even suggested that he may even hold a higher position in the drug network.

While his current whereabouts are unknown, a recent Lao Post article claims that Sisouk made a new status update on his personal Facebook account, declaring his innocence. However, he has not surrendered himself to the authorities, leading to further questions about his guilt. 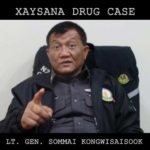 Lt. Gen. Sommai Kongwisaisook is commander of Thailand’s Narcotics Suppression Bureau. He has led a five-year hunt for Xaysana Keophimpa, and has arrested over 50 other individuals in the Xaysana drug network over the past five years.

How did the drug ring operate unnoticed?

Thai media suggests that Xaysana’s drug ring could not have operated undetected by Lao authorities. The Thai media have hinted that Xaysana must have enjoyed the protection of someone in the Lao political system. This, it is said, is how he has escaped justice without any police interference.

Meanwhile, despite numerous Thai press conferences and news reports, the official Lao media has remained quiet. Surprisingly, however, one state-owned news service did comment on the lack of official responses in Laos. An article was published by the English arm of Khaosan Pathet Lao (KPL), with the headline “No Reaction to Xaysana’s Arrest.” This article stated that the relevant authorities have not yet publicly acknowledged their part in the arrest, despite Thai police reporting that it was critical intelligence from the Lao side that ultimately led to the Xaysana bust.

A Vientiane Times article stated that Lao and Thai authorities are working closely to bring all the offenders to justice. It goes on to say that officials from the Lao embassy to Thailand had gone to the airport to witness the first arrest.

The new government and party led by President Bounyang Vorachit and Prime Minister Thongloun Sisoulith have made it a defining policy of their administration to stamp out corruption and other social ills, including the drug and timber trades. The Xaysana arrest happened at a time when the government has redoubled its efforts to halt these international drug routes.