The Hin Nam No National Protected Area is on its way to become Laos’ first natural UNESCO World Heritage Site.

“Becoming a World Heritage Site will also enhance the protection of the area, improve conservation and will facilitate better management of the natural resources in and around Hin Nam No, promote ecotourism and scientific research,” he added.

Hin Nam No NPA has been recognized as a site of global significance for the conservation of biodiversity because its variety of habitat and forest types provided by the landscape geomorphology support a high diversity of animals and plants, including a number of globally threatened species, endemic species and karst specialist species. Thus, the elevated UNESCO status will contribute substantially to the conservation of this unique ecosystem.

Deputy Governor Outhivong expressed that “Hin Nam No will attract both local and international tourists and thereby will generate incomes for local communities once it is nominated as a World Heritage Site. More importantly, it will also create opportunities to boost the livelihoods of the local communities who live around the area. By this means, they are also able to ensure their food security and alternative income generation.”

Under the newly signed MoU between Laos and Vietnam, a number of points have been agreed for which both countries commit to support the nomination of Hin Nam No National Protected area as a transboundary World Heritage Site, connected to Phong Nga Ke Bang National Park in Vietnam.

The two countries will also work together to appoint their own committees at different levels to help and push for the nomination of Hin Nam No National Protected Area. 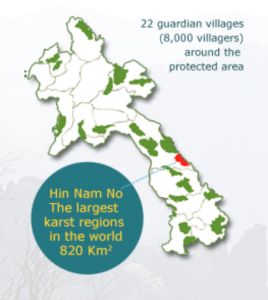 Based on a history of over five years of technical support for the management and development of Hin Nam No National Protected Area, the Deutsche Gesellschaft für Internationale Zusammenarbeit (GIZ) GmbH is continuing to support these important undertakings through the component “Integrated nature conservation and sustainable resource management in the Hin Nam No region” of the German Development Cooperation Project “Protection and Sustainable Use of Forest Ecosystems and Biodiversity in Laos” (ProFEB).

Hin Nam No is believed to have “outstanding universal value”, adding to or complementing the conservation values that have been considered of global importance in Phong Nga Ke Bang by UNESCO.

These values need strong protection and therefore need a strong commitment from the highest level and by all stakeholders.