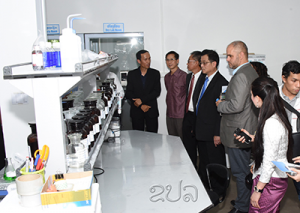 “We realized the importance and demand for laboratory services which are increasing in apparel with the development and the growth of business sector in various areas namely water quality and environmental analysis, analysis for development projects namely dams, mining and basic infrastructure development projects as well as food and non food industry and agricultural processing industry,” said Vongsack Mixay, the company’s Managing Director.

Phanthamit has spent close to two years on preparing for obtaining ISO/IEC 17025 accreditation. It was approved in December 2017, making the company the first private lab to have been awarded such an accreditation in Laos.

The company also plans to strengthen its capacity to be able to provide quality analysis for food, agricultural products and lab equipment testing services as the company has signed an MOU with AMARC of Thailand.

The company is currently in process of preparation and studying whether it is possible to provide product standardization services for exporters, entrepreneurs and SMEs and ODOP entrepreneurs.

“I strongly believe that being international standard lab that meets ISO standard, Phanthamit will help create trust for investors, both domestic and foreign, for their business operation and development in the Lao PDR,” said Mr Vongsack.