According to a 2017 Tourism Department (MOICT) report, it was observed that the month of November was Laos’ best tourism month, which had seen 358,997 people visiting the country, with December coming in close at second place with a little over 357,000 people.

It was noted that November was the start of the cool season, when it’s not too hot and not too cold. This is the month when most Europeans visit Laos. 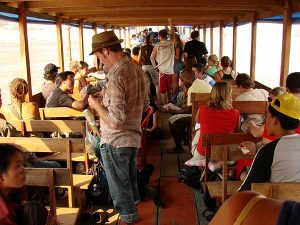 The lowest number of tourist arrivals was recorded in September (approximately 262,000 visitors), which is a time of fairly heavy rainfall.

The Boten-Bohan border crossing between Laos and China in Luang Namtha province recorded over 493,000 visitors, while Wattay International Airport registered a surprising 364,000 arrivals.

In 2017, over 1.7 million Thais came to visit Laos, making them the largest tourist nationality. Vietnamese tourists came in second with over 891,000. There were just over 639,000 Chinese tourists and about 170,000 Korean visitors.

Laos expects to welcome 5 million visitors during Visit Laos Year 2018 and is targeting tourism revenue in excess of US$900 million.