A country could tell its whole story through food, if only it knew how.

When Latsamy Vetsaphong first heard a western friend wondering aloud where they could buy some of the amazing delicacies they had tried while in Laos, she realised there was a gap in the market for Lao souvenirs.

And when she heard yet another friend lamenting that some of the food she had gathered to take home to relatives wasn’t nicely packaged, she knew she was onto something.

“I heard people saying that Laos didn’t export anything but timber and handicrafts,” she says.

“This was more than five years ago. I thought to myself, okay, what can I do to help?”

She decided to focus on some of the the country’s unique foods, using comments from her foreigner friends as a guide. 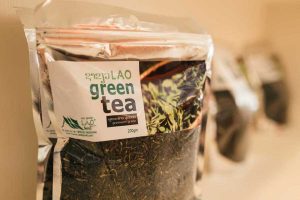 “Let’s say when they go to Luang Prabang, what do they like to buy? Quite often it’s riverweed, the famous one with sesame seeds,” she says.

But it wasn’t just foreigners who were picking up food as gifts for the family back home.

“I think even in Laos, locals still don’t know what food is available from north to south,” she says.

“Laos may be a small country, but people don’t realise how diverse the food is here. Northerners are often unfamiliar with specific southern ingredients.”

Through her new business, Lao Best, she has begun selecting what she believes is the best of the country’s products to sell in her shop, from small plantation coffee and wild honey, to riverweed and fish sauce. And with a career in the import and export trade under her belt, she has learned over the years what works.

“With the right packaging and presentation, we can tell our story all over the world – why we eat the way we do, and how we make our food,” she says.

The shop has been open just two months at the time of writing, and Ms Latsamy already has plans to open more branches outside of Vientiane – one in every province, if she has her way. 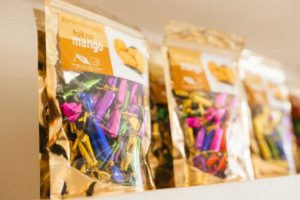 She has also started selling products to local minimarts, including Thai chainstore Jiffy, and hopes foreign shoppers will soon catch on to how easy it is to pick up well-packaged foods to take home.

She also plans, ultimately, to export the products through Lao Best, although not all of the foodstuffs will be successful on the international market.

“We’re now testing the market, to see what foods can be exported,” she says.

“An example is Lao jerky. Dried meat is eaten all over the world, and we have our version from Savannakhet, made from pork and beef. We just have to work how to export it, and where it would sell best.”

But she also wants to educate her own people about what her country has to offer.  One thing she has noted during the process of identifying the best foods is that many producers of food and handicrafts have benefited from sporadic assistance – both technical and in marketing terms – from non-government organisations. The assistance, while welcome, is often non-ongoing, and projects are often left to flounder. 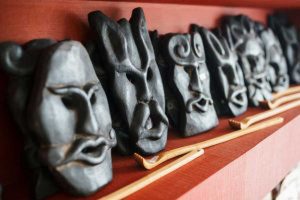 “They know the help won’t go on forever, but they often don’t know what to do next,” she says.

“They need someone to come in and encourage them to continue to produce their products, and guide them with their marketing. That’s what I’m trying to do.”

For the moment, though, she is focused on growing the business and expanding its list of products and urges anyone who wants to become involved to contact Lao Best on Facebook.