HONG KONG SAR – Media OutReach – 6 August 2021 – The Japan Food Product Overseas Promotion Center (JFOODO) was set up by Japan External Trade Organization (JETRO) to promote the brands of Japanese agricultural, fishery and food products. JFOODO has been devoted to achieving popularity of Japanese wines in Hong Kong with multiple campaigns over the past three years, lining up restaurateurs and consumers to have a better understanding of Japanese wines. 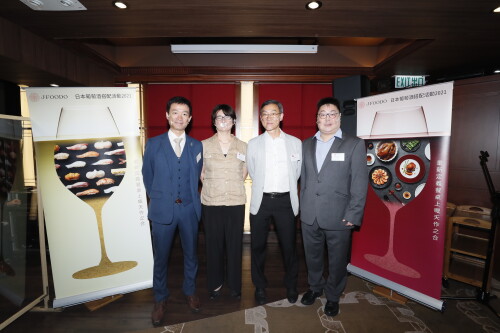 Indeed, the boundless possibilities of Japanese wines should be enjoyed by many more consumers. In this case, JFOODO joins hands with famed restaurants for a two-phase “JFOODO Japanese Wine Pairing Campaign 2021” in August and October. Highlighted a wide variety of Japanese wines, 60 well-known restaurants are to be invited to design their own specialty dishes, from Cantonese, Japanese and Spanish cuisine to name a few, for wine pairing. Two influential wine experts, Micky Chan and Reeze Choi, are to be the ambassadors for JFOODO Japanese wines, who offer wines pairing consulting services and wine knowledge training for cuisine teams of the listed restaurants.

To beckon media and restaurateurs in the F&B sector for the event, JFOODO held a brief press launch at Greater China Club yesterday, one of the participant restaurants. Mr. Isamu Nakayama, JFOODO Chief Operating Officer, as well as two JFOODO Ambassadors of Japanese Wines presented the new trend and demand of Hong Kong market and tips for wines and food pairing respectively. Participants of this event relished four newly tailor-made dishes paired with Japanese wines by Greater China Club.

Advice on Wines Pairing and Wine Knowledge for Cuisine Teams

Two market-savvy influencers in Hong Kong wine sector, Micky Chan and Reeze Choi, are appointed to be the Ambassadors for “JFOODO Japanese Wine Promotion 2021”. Based on the climate and topography of vineyards, grape varieties and winemaker’s craft, the ambassadors would give advice on Japanese wines pairing with food offered by the participant-listed restaurants. They would take time to educate sommeliers and cuisine teams on the list to further understand the characteristics and charm of Japanese wines.

“I’m delighted to be the ambassador again to present Japanese wines during the promotions. Wine-drinking is embedded in Hong Kong daily life. As Hong Kong people are so fond of Japanese cuisine, wines made in Japan must also whet their appetite! Indeed, there is a whole world of wines to choose from, but the Japanese kind is emerging and hard to forget. Over the past two years, JFOODO strived to bring the wines to the spotlight and accessible to people. Now it’s time to further impress people by bringing exquisite wines pairing experience on the table. Feasts of grandeur are going to be held in collaboration with fine restaurants and renowned wine importers. So hone in on the Japanese varieties and tap into new possibilities!” said Micky Chan, the Ambassador of Japanese Wine by JFOODO. Chinese consumers are eager to purchase luxury as a means of social advancement and self-differentiation, finds KPMG report