HONG KONG SAR – Media OutReach – 29 September 2021 – A research team led by scientists at Hong Kong Baptist University (HKBU) has developed a novel cell sensor with a barcode-like micro-channel structure that enables rapid and low-cost screening of drug-resistant bacteria. The invention could potentially be used on a large-scale in resource-limited situations such as frequent safety screenings of water, food and public facilities, as well as urgent surveys of massive samples during an infectious disease outbreak, particularly in developing countries.

A research paper on the novel invention was published in the international academic journal Biosensors and Bioelectronics. 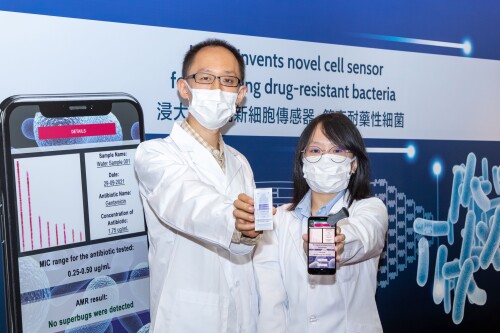 A research team led by Dr Ren Kangning, Associate Professor of the Department of Chemistry at HKBU (left), designed a fully automatic, microscope-free antimicrobial susceptibility testing (AST) system. It enables rapid and low-cost screening of drug-resistant bacteria by scanning the “barcode” on the cell sensor with a mobile app, which is shown by Chan Chiu-wing, a member of the research team and a PhD student of the Department of Chemistry at HKBU (right). 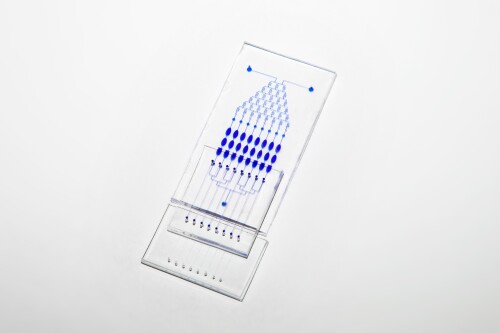 A rapid and low-cost testing approach

Antibiotics are often used to treat bacterial infections, but the overuse and misuse of antibiotics have created the problem of drug resistance. Antimicrobial susceptibility testing (AST) is used to determine which antibiotics can effectively inhibit the growth of a certain type of bacteria effectively. However, conventional AST methods are too slow, as they require 16 to 24 hours for results, while modern rapid ASTs are expensive and require elaborated laboratory equipment. A rapid and cost-effective strategy is therefore needed to screen bacterial samples onsite, with advanced laboratory testing arranged only for those suspected of containing drug-resistant bacteria.

In response to this need, a research team led by Dr Ren Kangning, Associate Professor of the Department of Chemistry at HKBU designed a fully automatic, microscope-free AST system. It comprises two main parts: a cell culture zone and a “barcode” cell sensor. The cell culture zone consists of a set of micro-channels filled with fluids that contain cell culture media as well as different concentrations of the antibiotic. The “barcode” cell sensor contains an array of “adaptive linear filters” arranged in parallel that resembles a “barcode” structure. Users can finish the onsite screening within three hours by scanning the “barcode” with a mobile app developed by the researchers, and it will indicate whether any drug-resistant pathogenic bacteria is present in the sample.

When conducting AST with the system, bacterial samples will be injected into and incubated in the cell culture zone. Bacteria in the test sample inside the micro-channels show different proliferation rates depending on different concentrations of the antibiotic.

After completion of the culture period, the bacterial cells will flow through the “adaptive linear filters”. The cells will not accumulate around the nanopores on the sidewalls of the micro-channels, instead they will be driven down by the fluid and be collected from the end of the micro-channels. The accumulated cells will then form visible vertical bars, the lengths of which are proportional to the quantity of bacteria cells cultured under the different concentrations of the antibiotic.

A cell phone equipped with a macro-lens can then be used to photograph the “barcode” created by the AST. The image will be analysed automatically by the mobile app.

The research team tested E. coli and S. aureus with the “barcode” cell sensor and the results were consistent with those of the conventional AST. The test can be completed in three hours, which is much faster than the conventional AST. Microfluidic approaches developed by other researchers can also attain comparable speed, but they rely on expensive instruments for analysis in general.

Potential for use in resource-limited regions

“Our ‘barcode’ testing system is a promising new tool in the fight against antimicrobial resistance. We hope that it will benefit the routine screening of drug-resistant bacteria in the food industry, public areas and healthcare facilities as it does not require advanced clinical facilities or professional testing skills,” said Dr Ren.

The “barcode” cell sensor has a low production cost, and it is estimated to be below one US dollar per piece. The research team has filed a patent application for the “barcode” cell sensor. “We plan to develop our invention into a portable AST instrument, and ultimately, we hope it can be used in resource-limited regions,” Dr Ren added.

Apart from researchers from HKBU’s Department of Chemistry, the research team of the “barcode” cell sensor also included scientists from the Department of Computer Science at HKBU and the School of Medicine at Stanford University.

Singapore CEOs worried about recession’s impact on business growth and talent, but see global economic optimism over the next 3 years: KPMG 2022 CEO...

World’s tallest timber apartment tower to be built in Zanzibar