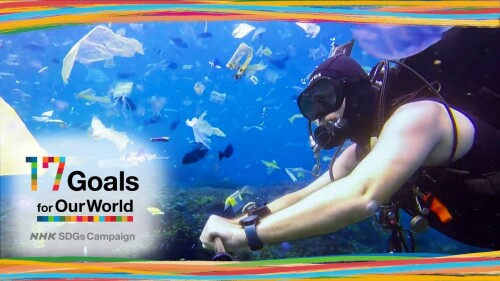 NHK WORLD-JAPAN, long committed to bringing issues of global importance to the forefront, in January 2021 launched a SDGs (Sustainable Development Goals) campaign that features programming and a special “17 Goals for Our World” website that mirrors the SDGs set forth by the United Nations. The website highlights NHK WORLD-JAPAN’s vast collection of premiere and video on demand (VOD) programs that maps to each of the 17 goals, which include striving for clean water, health/well-being, education, sustainable cities, and responsible production/consumption; and eliminating poverty, hunger, and social inequalities.

The wide range of COP26-themed programming spans topics from man-made environmental damage to pollution to extreme weather and sustainability, and includes the popular series Zeroing In: Carbon Neutral 2050. The series, available now on VOD, was created in partnership with several public broadcasters in the U.S., and focuses on grassroots actions people can take to reach a carbon-neutral future.

Another currently available campaign program is Zero Waste Life, a series that highlights Japan’s “Mottainai” philosophy of striving for a life of wasting nothing and treasuring what we have. It airs as part of the event in November. Past episodes are also available to watch on VOD.

An episode of Direct Talk that highlights the “Peace, Justice and Strong Institutions” SDG is also featured among the VOD content. “Braving Press Freedom:  Maria Ressa/Journalist,” offers insight and interviews with Ressa around her news site Rappler’s unwavering coverage of the struggle of journalists and activists fighting Philippines President Rodrigo Duterte’s attacks against press freedom and human rights. On October 8, 2021, Ressa was awarded the Nobel Peace Prize – the first Filipino journalist to be honored with the prestigious award.

Other programs related to the campaign feature a new documentary, Five Frames for Love, a short-form series of 15-minute vignettes that follow the unique, creative lifestyles of youth through five specific “frames”: Fashion, Family, Followers, Freedom, and Future. The series begins airing on November 20.

A short drama series, Mini-Dramas on SDGs, convey the message of the importance of individuals joining to create a society in which no one is left behind. Each two-minute film is based on one of the United Nations’ 17 SDGs, with each depicting how Japan is endeavoring to achieve these goals. This series are available to watch on VOD.

Numerous other programs that highlight the 17 SDGs are available via VOD on the website.

Japan International Broadcasting Inc. (JIB), a subsidiary of NHK, is responsible for the worldwide distribution of the HD English language news/lifestyle channel “NHK WORLD-JAPAN,” as well as the HD Japanese language channel “NHK WORLD PREMIUM.” Currently, the two channels are broadcast around the world on three international plus domestic satellites in their respective markets and reach households, hotels, and others via DTH, cable, IPTV, and terrestrial broadcast.