SINGAPORE – Media OutReach – 13 January 2022 – Get ready for a slew of award-winning shows and content from WeTV in 2022. WeTV, Southeast Asia’s leading video-on-demand (VOD) and over-the-top platform (OTT), will accompany you through 2022 with a lineup of shows to tantalize your imagination and emotions. 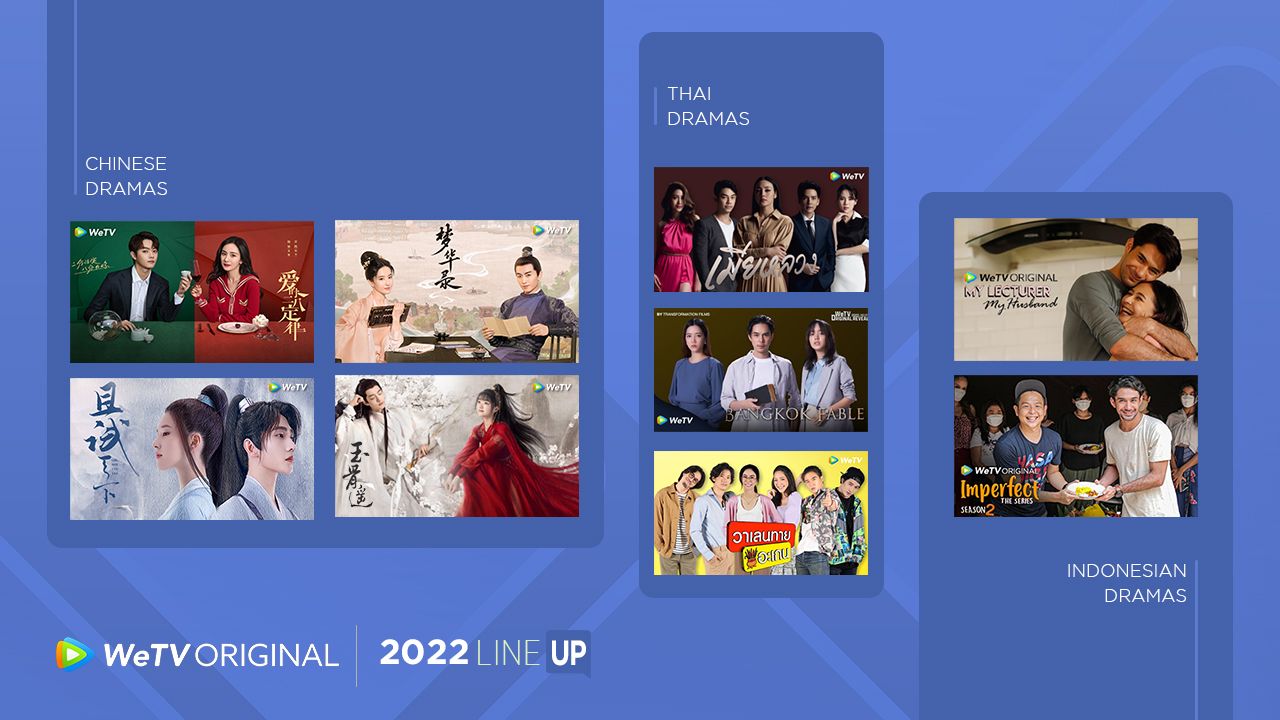 From science fiction, to fantasy, soft romance and even Wuxia films, WeTV will feed your appetite to immerse in binge-worthy and premium shows including Tencent Video Originals “The Longest Promise”, “Beautiful Dream Bianjing”, “My Girlfriend is an Alien 2”, and WeTV Originals “Little Mom 2”, “My Lecturer My Husband S2”, and “Imperfect The Series 2”.

In addition to these titles, fans can continue to binge watch content from WeTV’s exclusive and extensive library of international, local, and original content as well as childhood favourite shows. Language has never been a barrier as WeTV provides high-quality subtitles in nine multinational languages including Arabic, Bahasa Indonesia, Chinese, English, Korean, Malay, Portuguese, Spanish and Thai. Dubbing is also available for a wide variety of Chinese dramas, and not forgetting the Chinese and Japanese anime series.

As part of WeTV’s Global Ambassadors program, fans of Dilraba, Xiao Zhan, Yang Mi and Yang Yang can also look forward to seeing these megastars on screen this year.

“We pride ourselves in providing broad availability across all devices ranging from mobile phones and tablets to laptops and smart TVs, allowing our viewers to enjoy premium Asian content whenever and wherever they go,” said Jeff Han, WeTV Director and Vice President of Tencent Online Video. “WeTV is committed to delivering a first-class entertainment experience to viewers in Singapore and the region. We look forward to building and strengthening our partnerships with leading production houses in the region so as to bring more happiness and entertainment through our original content to viewers in 2022.”

WeTV is a global video streaming platform launched by Tencent Video, the largest online video platform in China by mobile daily active users. Since its launch in 2019, WeTV has steadily grown its presence in the region. Today, it is ranked as the top-three OTT platform in various Southeast Asian markets such as Indonesia, Thailand, Malaysia, and the Philippines. The number of WeTV’s monthly active users (MAU) has been growing exponentially year-on-year. From 2020 to 2021, WeTV saw a 67% spike in MAU, and an impressive leap of 95% in WeTV VIP Users.

Intrigued to hear more? You can find more information about the program lineup in the fact sheet below or visit WeTV’s official pages for the latest updates on our upcoming shows:

Press assets can be found here.

WeTV is an Asian streaming service that sees the creation of premier video-on-demand (VOD) and provides over-the-top (OTT) local content. The streaming service provides content from around the region, including selected Chinese, Indonesian, Korean, Malaysian, Philippines and Thai series and movies. Operating as a freemium service, viewers can access some content without the need for a paid subscription and premium content at a small fee. The basic features also include free subtitles. WeTV is available on the browser at wetv.vip, or on the WeTV application that can be downloaded from the Apple Store for iOS users and the Google Play Store for Android users.