One day in 2004, Houng Phommachak and two friends ventured out to the countryside near their village in northeastern Laos in search of scrap metal to sell, to supplement their families’ meager rice-farming incomes. They came across a piece of metal half-buried in the ground and set about digging it up.

The three friends recognized it as a piece of an old bomb casing, and assumed it was no longer dangerous. They were wrong.

Unknowingly, the father of five had set off a cluster bomb, known in Laos as a “bombie.” The shrapnel ripped through his body and those of his two friends. The friends were killed instantly; Houng was left blind in one eye and lost both his lower arms.

A decade later, the incident is still vivid for Houng as the day-to-day struggles he and his family face are a constant reminder. Family and friends came together to help with the hospital bills that Houng had no money to pay for. His wife now relies on the support of fellow villagers to help with the family’s rice field and his eldest daughter spends much of her time caring for her disabled father.

“It’s very difficult for me. I need someone to help me to eat and drink water, and go to the bathroom,” Houng said of his circumstances today.

“When the accident happened, it was very difficult for my family to live. Nobody was earning money to support my children,” the 52-year-old recalled.

The Lao government estimates that there are about 15,000 people in the country who have been injured by unexploded ordnance, or UXO, and are in need of support, a legacy of years of secret U.S. bombing during the war against neighboring Vietnam.

Yet there are few support services available.

A lack of funding means most survivors do not get access to proper medical treatment. They lack ongoing disability services, like physical therapy, access to prosthetics, mental health support and livelihood training. In one of the poorest countries in Southeast Asia, families are left with the burden of caring for a parent or child while trying to sustain their own livelihoods. 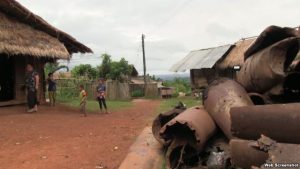 Furthermore, most of the population lives in rural areas, adding to the challenges of getting the assistance they need.

“There are still people that fall through the gaps that we don’t hear about until many years after their accident,” said Colette McInerney, the country director of World Education, among the largest of just a few victim assistance providers in the country.

The U.S.-based non-profit organization has the funding to support just 250 survivors per year.

“For INGOs [international non-government organizations] and NPAs [non-profit associations], there really is a serious gap in funding to provide a comprehensive support to survivors no matter where they live. And for survivors themselves, the financial burden on a family once someone is injured or killed is quite significant,” she said.

The government has a strategy in place that broadly takes into account the requirements across the UXO sector, but most of its energy is currently focused on the enormous task of UXO clearance, which in itself is largely dependent on foreign aid.

“Many people have been injured by the bombs, but at this point, the funding is not enough to help them,” said Kingphet Phimmavong, the provincial coordinator for the government-affiliated UXO Laos, the largest clearance organization in the country.

US expected to increase funding

Between 1964 and 1973, the U.S. dropped more than 2 million tons of bombs on Laos as part of a secret operation seeking to cut off North Vietnamese supply lines along the Ho Chi Minh trail.

It’s estimated that close to a third of the 270 million” bombies”  that were dropped did not detonate. Some 40 years after the war, the mountains and rice fields of Laos’ Xieng Khouang province remain riddled with the deadly ordnance, which were designed to explode into hundreds of pieces and rip through human flesh and bones.

President Barack Obama will become the first sitting U.S. president to visit Laos when he attends a summit of Southeast Asian leaders in Vientiane next month. The U.S. Embassy in Laos confirmed that Obama would announce an increase in funding for the UXO sector, although the details have yet to be finalized.

According to the advocacy group Legacies of War, between 1995 and 2015, the U.S. contributed about $4.2 million annually to the UXO sector in Laos, most of which went toward clean up efforts. The U.S.-based organization says this compares to $13.6 million spent per day (in today’s figures) on the bombing of Laos between 1964 and 1973.

“U.S. contributions to the UXO sector have increased many-fold over the past 10 years, reaching $19.5 million in 2016. Most of this increase has gone to clearance operations and an improved survey methodology which will improve the efficiency of the clearance work,” said Titus Peachey, the group’s chairman.

“What is needed now is increased support for the estimated 15,000 survivors of UXO accidents, many of whom will need medical and rehabilitative services for the rest of their lives,” he said via email.

Concern for the future

Houng spends many days now at relative’s restaurant, sitting idly, while his daughter works to pay for her younger sibling’s education and also keep an eye on her father.

He says people know more about the risks of UXO today than they did in the past, but they remain unequipped to deal with those that fall victims to explosions. 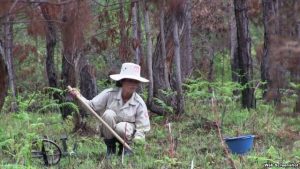