Premier Li Keqiang came back to Beijing from Laos on Sept 9 after having attended leaders’ meetings on East Asia cooperation and making an official visit to Laos.

He was greeted by a red carpet and guard of honor before boarding.

Before departure, he made an unscheduled visit to a store in Vientiane, Lao’s capital and chatted with store owner and shoppers. Seeing the Chinese premier, local people gathered with excitement and shook hands with him, with someone saying “hello” in Chinese. 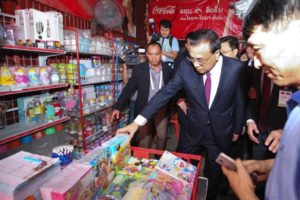 COLOTECT™ Test Kit has obtained the Certificate of IVD from HKSAR Department of Health, Providing A Convenient Way to Detect Non-invasive Colorectal Cancer