The organizers of TEDxLaneXangAve, the first-ever TEDx event in Laos, have just recently released their promo poster.

It features a stunning artist’s rendition of the iconic Patouxay Monument in the sleepy capital of Vientiane. The silhouette-like nature of the famous structure reflects the situation in which Laos finds itself – developing, growing, forming. In a time where the small country is experiencing high rates of economic growth and the rise of incomes, it also represents the people’s belief that they can mold their country’s future into anything they desire. The image is consistent with the philosophy of TED – to spread ideas on how to foster development in the country in a way that is beneficial to all.

“The Patouxay Monument was chosen to be featured in the poster because of its location on Lane Xang Avenue, the most prominent street in Vientiane, and it is widely recognized as a symbol of Laos,” says one TEDxLaneXangAve organizer.

The poster also features a striking red X, in the spirit of TEDx, that features a few light waves flowing through it. Such is the manifestation of the theme “changing currents.”

The TEDxLaneXangAve speaker lineup has not yet been revealed. More information will be released next week.

Meanwhile, interested parties are invited to visit the official Facebook Page of TEDxLaneXangAve that was launched yesterday. 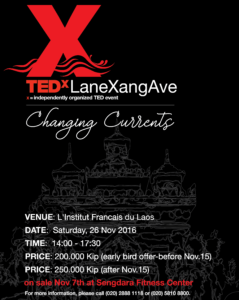