Among Asian countries, Laos has the highest percentage of forest area at 92.1 percent of the total area of the country. On the other hand, India, Bangladesh, Mongolia and Pakistan are among those with the least forest area.

Bhutan (81.5), Brunei (79.7) and South Korea (63.7) are also among Asian countries that have a sizable proportion of land occupied by forests. Malaysia and Indonesia also have significant proportions of forested land.

Asia-Pacific has lost around 10 million hectares of forest between 1990 and 2005 over the past 15 years, according to data from the Asian Development Bank. 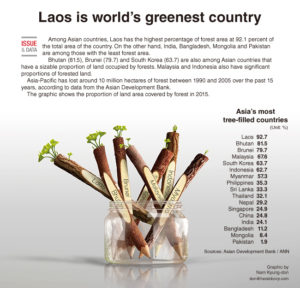 The graphic shows the proportion of land area covered by forest in 2015.