A petroleum refinery project located in the energy and chemical precinct of Saysettha Development Zone, Vientiane is expected to resume this month after construction was halted for about six months.

Under the project, Yunnan Dongyan Industrial Co., Ltd holds a 75 percent share, while 20 percent is held by Lao State Fuel Company and the other 5 percent by Lao-China Joint Investment Co., Ltd.

At present, work on the project was about 35 percent complete with construction to be finished in November next year, Deputy General Manager of the Lao-China Joint Venture Investment Co., Ltd., Mr Kiengkham Phoutchantavongsa, told Vientiane Times during a visit to the zone recently.

He cited a change in shareholders leading to a halt in the project.

The petroleum refinery project will cover an area of over 280,000 square metres with total investment of about US$179 million.

The refinery would use low grade mixed light oil as raw material and adopt advanced technologies to produce gasoline, diesel, LPG, purified petroleum benzene, sulphur and other petroleum based products, according to information provided by LCPC.

Production capacity of standard gasoline would be 300,000 tonnes per annum and 500,000 tonnes of diesel per year.

Once operational the refinery would become among the nation’s largest industrial enterprises and be able to supply about 65 percent of fuel in Laos, Mr Kiengkham said.

He added the project would also include construction of a petroleum products storage facility with a capacity of 60 million litres.

At present, the oil warehouses of the Lao State Fuel Company around the country contain only 40 million litres.

Saysettha Development Zone was established in 2010 with the aim of developing an eco-industrial city.

About 35 Chinese and foreign companies have already moved into the zone, with an aggregate investment of about US$350 million.

According to the company, in the first phase the zone will mainly develop industry, focusing on the processing of agricultural and other primary products like hardware, building materials and machinery .

The zone will also support the technological innovation and entrepreneurship of small and medium enterprises.

In the second phase from 2016-2020 and the third phase from 2020-2030, the zone will mainly develop commerce and trade along with a focus on building a new part of Vientiane.

The zone expected to spend about US$650 million on infrastructure investment over three phases, on about 1,149 hectares of land, according to the company’s development plan. 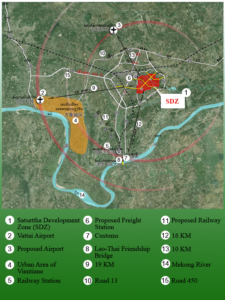