The Vietnam War was one of tragedy, terror, and tension, yet for the majority of the world it is in the past and is simply a period to be remembered. However, for the people of Laos, the Vietnam War, despite ending in 1973, is still being fought today. This anomaly is because of the war’s time period and location. With the newly developed bombers of the 1960’s, many bombs did not detonate upon collision with the ground. Additionally, Laos was the most bombed country in the Vietnam War, being assaulted on average once every eight minutes for nine desolate years. As a result, the country of Laos is still littered with bombs in every one of its corners. Thousands have died due to an unfortunate encounter with these unstable landmines dubbed unexploded ordnance (UXO). In fact, experts calculate that Laos may still contain up to eighty million unexploded, live bombs, buried in its soil. Introducing the UXO Drone.

Today, a new company by the name of Aerial Lab is using new bomb-detection technology to undo some of the damage that was inflicted onto Laos by outdated bombing technology. To achieve this goal, the company has begun developing a piece of nascent technology named the UXO Drone. By using a drone to levitate a UXO-detecting rig over problem areas, the UXO Drone can overcome the problems that current bomb-disarming techniques fall victim to. With the UXO Drone, neither human nor animal lives have to be risked to disarm a bomb; instead, an unmanned air vehicle (UAV) can take the risk.

Aside from the diminished risk of using the UXO Drone stand several other advantages. Foremost, the drone will be far more efficient than human teams who have to slowly walk across landmine-filled fields to detect bombs. The UXO Drone will simply glide across each field and detect bombs below it. As a side benefit, drones are able to work hours that humans simply cannot fill due to a need for sleep. In turn, Laos will be bomb-free in as little time as possible. 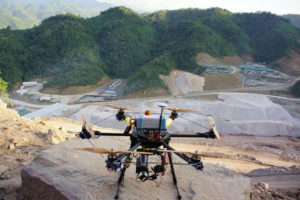 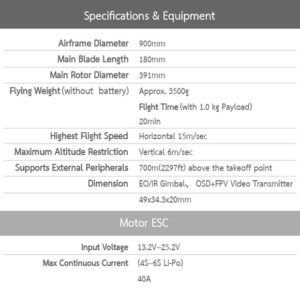 Unfortunately, there is one barrier that stands in the way of implementing this solution: cost. Constructing several six-propeller bomb-detecting drones is no small task. To remedy this issue, the UXO Drone team has launched a crowdfunding campaign on Indiegogo. Patrons will be rewarded with a variety of merch as well as the satisfaction of saving lives.

About Aerial Lab
Founded in 2009, Aerial Lab is the non-profit brainchild of Dr. Prasatporn Wongkamchang. Through a partnership with the KCR Flying Camera Team, the most prestigious aerial photography team in Thailand, and the use of drones, Aerial Lab aims to help solve some of the major problems facing Laos today. While working with the KCR team in Laos for three years, the Aerial Lab crew had plenty of opportunities to the devastating damage that unexploded ordnance can cause. In turn, Aerial Lab hopes for the success of its crowdfunding campaign and subsequently the UXO Drone to eliminate the ticking time bombs that are buried in the land of Laos.