The striking entry was inspired by the mythical Kinnaree, a half-bird/half-woman that features in the country’s diverse Buddhist and ancient Hindu-influenced culture and mythology alongside various tribal and animist spiritual beliefs.

An elaborate design as much puppetry as couture bedecked in shimmering gold, Laos’ remarkable entry beat out a list full of incredible and extravagant outfits from around the globe.

The victory wasn’t enough to win overall, with the 2018 Miss Universe title going to the Philippines’ Catriona Gray.

Ms On-anong, after an admirable attempt to decipher the gist of a comedic setup attempt by host Steve Harvey, went on to thank fellow competitors, organizers and supporters.

“Thank you for your support. I’m so proud to have won the best National Costume and to represent my country,” On-anong said.

“This is the first year we have participated in the Miss Universe pageant and I’m so glad that we can make it this far.”

Images of her costume and On-naong’s thoughts on Miss Universe Laos were among content shared in a video via her Facebook page. 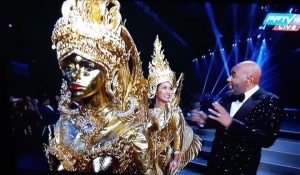 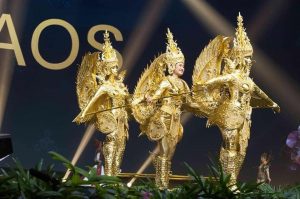 The back story behind the outfit was previously reported in Laos’ state-run daily, the Vientiane Times, in which designers positively referenced the public response to July 23’s Attapeu Dam Disaster among the inspirations for the 40kg-plus outfit.

The selection came after organisers announced the cancellation of the scheduled contest for the title.