Pimai Lao (Lao New Year) and The Golden Flowers of the Cassia Fistula known as Dok Khoun are inseparable in Laos and much of Buddhist-influenced South East Asia beyond.  The Laotian Eye writes…

The tree is known in the vernacular of Laos as Dok Khoun, by its Latin name cassia fistula and to the amusement of some, “Golden Shower” in English.

Its annual flowering serves as a signal reminding people that celebration of Lao New year has returned once again. 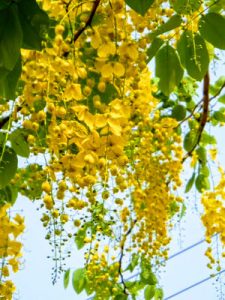 Lao New Year Perennially Associated With Dok Khoun (Cassia Fistula)Flowering in advance of its new leaves, these trees serve as colorful beacons in bloom just in time for the biggest annual festival on the Lao calendar.

This flowering species can be found across Laos and Thailand’s northeastern provinces and beyond.

Specimens bathe the roadsides and house’s gardens in their yellow blossoms.

The flowering tree is native to southern and southeastern Asia, from Sri Lanka through India to Myanmar, Laos and Thailand.

One should expect a tree to grow to about 10-20 meters in size with a spray of flowering petals that extend for about 20-40 centimeters in length.

The fruit is a legume, 30–60 centimeters long and 1.5–2.5 centimeters broad, similar to a long bean but thicker.

This contains several seeds which are poisonous to humans if consumed.

During the Lao New Year period in mid-April, the yellow flowers are seen in blossom, making it one of the most beautiful times of the year to visit Laos.

Traditionally, folk also use the blooms for ceremonies to bring luck.

They may try tying it onto their house or vehicle, particularly when having acquired a new or renovated model.

The petals are mixed with fresh water, turmeric and perfume to make a form of holy water to pour in the Baci ceremony or the traditional paying of respects to elders.

People also use the flower at temples, soaking the flower branches into the holy water and sprinkling it onto images of the Buddha.

These are offered for sale to devotees who have not brought along their own concoctions.

This can be seen in every Buddhist temple nationwide.

At home, Lao people also like to attach a spray of Dok Khoun flowers on their house during New Year.

Some people also attach a flower on their cars and motorbikes during Lao New Year.

They believe it may bring them good luck, happiness, and safety while driving.

At a party, some creatively form Dok Khoun crowns or tiaras as accessories.

The national flower is the frangipani (known in Lao as Dok Champa) which is also widely used during Lao New Year.

Dok Khoun and Dok Champa are in flower in close proximity, appearing to seek the attention of passersby in a friendly competition along the roadsides, by houses and temples as Lao New Year is celebrated.

The much taller Dok Khoun trees also boast foliage that can shade a house, which is why many folks make sure to have one in their garden.

From a more metaphysical perspective, one thing we can learn from flowers is giving.

A flower offers its beauty with no conditions. It never says “if you are not kind to me, I won’t blossom!”

Instead, a flower gives its utmost in a short life to bring happiness to others. May our hearts will become be more beautiful, just like these blossoms!