HONG KONG SAR – Media OutReach – 10 August 2021 – In the myriad of voices and opinions swimming in the tech world, good advice is hard to come by. This is why having trusted voices is important, and prominent Key Opinion Leaders (KOL)  in the technology arena such as Jonathan Rettinger, as well as well-known influencer Forbes contributor Ben Sin and popular phone review website GSMArena are highly sought after and followed. What do these influencers have in common?

They have recently reviewed TECNO’s latest selfie smartphone, the CAMON 17 Pro. They have unanimously given much high praise for the phone, which serves as a testament to the capabilities of CAMON 17 Pro and how much TECNO is able to improve from one model to the next.

Rettinger has a cult following for his tech reviews as his decorated history as a commentator for CNBC and Fox Business has seen him become a familiar face with many tech consumers. A strategic switch sees Jon focusing entirely now on creating videos for his 1.5 million subscribers on Youtube that generates an estimated 20M views per month.  During his review, Rettinger calls the CAMON ‘the best phone you’ve never heard of’.  He also notes that the phone has a “beastly 5000mAh battery” with a “nice, decent, full HD display” and that the phone “feels like a premium device for something you don’t generally see at this price point” after he had unboxed it and given it a go. 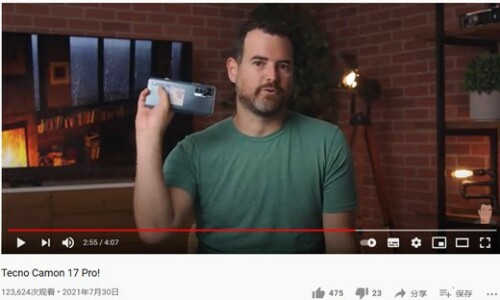 Forbes contributor Ben Sin, known for his honest tech product reviews, gave a glowing endorsement of the CAMON 17 Pro. “The phone is solidly built—its plastic back has a frosted finish that gives it a more premium feel; the side-mounted fingerprint scanner is fast and responsive; the screen pumps out vivid colors with respectable brightness; and the main camera is surprisingly capable,” he said. “The standout feature here is the 48-megapixel selfie camera, which uses an OmniVision sensor. It’s a fixed-focus lens, but sharpness and detail are both excellent. ” Ben also shared that he thinks “for its intended market, the Camon 17 Pro should be another hit.” 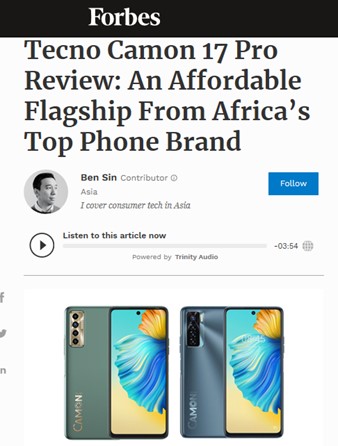 GSMArena also provided informative insight into the features of the phone as they gave the CAMON 17 Pro a thorough review. With a high 4 out of 5 stars rating on GSMArena, the CAMON 17 Pro is positioned as a smartphone with high quality cameras that is extremely value for money. GSMArena also agreed that the CAMON 17 Pro even came with a “48MP selfie camera, which is a properly rare sight – at any price point”. The review provided many sample pictures as well as videos using the countless outstanding tools that come with the CAMON 17 Pro. After a successful launch of the TECNO CAMON 17 Pro, many fans and consumers are eager to find out more or to test it out themselves. GSMARENA has compiled a list of highlights that summarises some of the outstanding improvements made to the CAMON series. 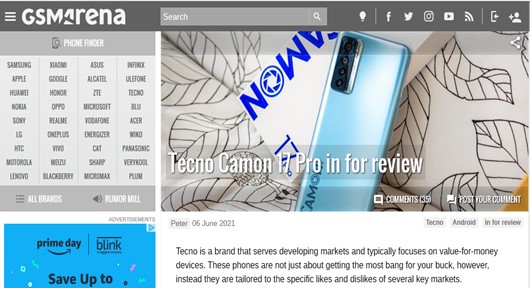 The world has witnessed relentless waves of upgrading and modifications. Surprises and disappointments have littered the way, with unfulfilled promises and unrealistic expectations. The widely recognization by international industry media and KOL  has intensified TECNO’s globalization achievement in breaking into emerging markets around the world and rising position in global smartphone industry.  What new journeys will TECNO truly bring us? Let’s stay tuned.