Xayaburi Power Company and the government of Lao PDR have awarded Poyry an extension to the owner’s engineering services contract for the site supervision of the Xayaburi hydropower plant in Laos.

The value of the new contract was not disclosed.

Xayaburi, on the Mekong River in Xayaburi Province, will have an installed capacity of 1,285 MW from seven 175-MW turbine-generator units that will supply electricity to Thailand and one 60-MW unit to supply electricity to Laos. This electricity will replace diesel power plants in the Luang Prabang and Xayaburi provinces. Power generated by the run-of-river project – anticipated to be 7,370 GWh annually — will be sold under a 31-year power purchase agreement to the Electricity Generating Company of Thailand and Electricite du Laos.

A loan totaling more than US$531.7 million was approved in May 2016 for development of Xayaburi. In total, the project is expected to cost $3.5 billion, with additional financing coming from a consortium of Thai banks.

Poyry has assisted in the redesign of the project to “create a landmark power plant on the lower Mekong,” according to a press release. “This re-design has concentrated mainly on the optimisation of the fish migration facilities, sediment transport and navigation locks, with substantial progress achieved in applying the latest technical and scientific knowledge.”

Xayaburi is expected to begin commercial operation in 2019.

Other companies involved in development of the project include AF-Consult Ltd. of Switzerland, Compagnie Nationale du Rhone of France and the TEAM Group of Thailand.

Earlier this year, Poyry was named to provide detailed design services for the 500-MW Lower Kelekoy hydro project in Turkey. 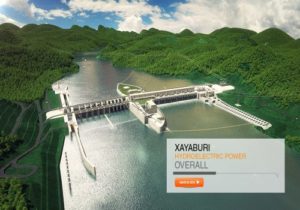