Sabre Corporation and SilkAir, the regional wing of Singapore Airlines, have announced new flights between Singapore, Vientiane and Luang Prabang are now available for travel agents to book through the Sabre Travel Marketplace.

This is the first time this air content will be available to travel agents via a Global Distribution System (GDS).

With the new destinations, the full service airline operates almost 400 weekly flights to 51 destinations in 14 countries, using a fleet of Airbus 320 and Boeing 737 aircraft.

“This new service connects Laos with the joint Singapore Airlines and SilkAir network of over 100 cities worldwide, via the Singapore Changi Airport hub and connecting international flights. Now, through our agreement with Sabre, these flights will also be made available to over 425,000 Sabre-connected travel agents globally, supporting further growth in travel bookings to and from Laos,” added Mr Pua.

Total visitor numbers to Laos reached 4.6 million in 2015 and are projected by the Lao Tourism Development Department to almost double by 2025, reaching 9 million.

Sabre is the first GDS to enable electronic ticketing of SilkAir tickets amongst authorised travel agents in Laos, which is a non-IATA Billing and Settlement Plan (BSP) country. 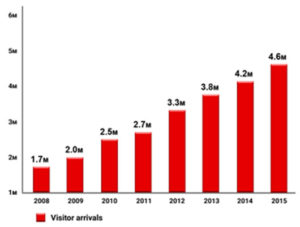