Champa Meuanglao, the official Lao Airlines inflight magazine, has undergone a drastic change as part of a reboot that now showcases a modern and sophisticated Laos.

With a newly designed logo, backed by an impressive team of editors, designers and photographers, the revamped, bi-monthly publication reflects an evolving Laos, showcasing the country’s arts and culture scene, world-famous cuisine and enduring popularity as a travel destination.

Champa Meuanglao now also focuses on business innovation and the rapid development of Laos as a commercial hub in the region. This is happening at a time when Lao Airlines is also making both small and large scale organizational improvements in attempt to enhance its competitiveness.

The revamped first issue cover features The Walking Street, a bustling part of the riverside in Vientiane that shows a vibrant night market teeming with delicious food stalls, eclectic music and the hippest of Vientiane youngsters.

On the topic of the Walking Street, CML Managing Editor Sally Pryor writes, “No, this is something different. It’s a strange sensation, alighting from a car (you can’t really walk until you get there) and making your way through the narrow space between the buildings at Vientiane New World, a new shopping district facing the river. If night has fallen, the lanes and courtyards between the buildings will be filled with pop-up food stalls, funky open-air bars and racks of vintage clothes. Clusters of people – mainly hip young Lao, savvy expats and a smattering of tourists who probably can’t believe their good fortune – mill around on crates, benches and avant-garde seating. Many of them are holding drinks that actually glow, and settle in for several hours. Welcome to Walking Street, the unexpected – and yet, when you think about it, completely inevitable – sensation lighting up the pristine, darkened facades of what would otherwise be a dead space after dark. It’s the brainchild of Anouza Phothisane – AJ to his friends – a local entrepreneur who, in his words, just wanted “to create a new chill-out space for people to hang out – not too fancy”. 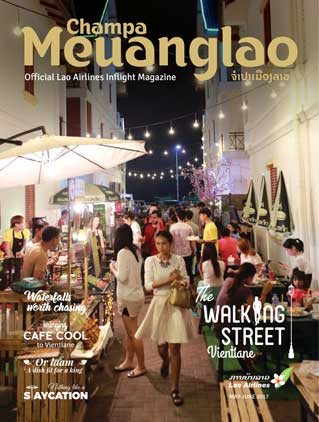 The magazine also features Naked Espresso as the burgeoning coffee empire that has hit Vientiane by storm, TOHLAO co-working space’s role in the fledgling startup community, 108 Jobs launch of the country’s first job app, LTH’s affirmation as Apple’s only trusted official authorized reseller, and a story on Laos’s entry into the global Slow Food Movement.

In addition to the editorial content, readers have come to rely on the advertisements in the magazine as an easy, time-efficient way to find about products and services in Laos and in the destination countries to which Lao Airlines flights travel. In a peaceful, serene environment such as an aeroplane seat, adverts stand the best possible chance for recall.

Champa Meuanglao Magazine is the nation’s prime vehicle for getting an advertiser’s message in front of the people that matter.

The benefits that advertisers can expect include: