China’s “One Belt, One Road” vision of connecting itself to the rest of ASEAN has started to materialize, as construction on the railway has progressed to more than 10 percent of the project linking China’s border to Laos.

However, one expert has cautioned that the Chinese government’s financial support for the “One Belt, One Road” project will likely diminish in the future.

In a keynote address at an international conference titled,“Belt and Road Initiative: Network Opportunities with CLMVT”, the vice chairman of the National Development and Reform Commission of China, stated that the Chinese government has given priority to building road and rail connections with Cambodia, Laos, Myanmar, Vietnam and Thailand (CLMVT).

China also wants to continue improving trade and tourism with all five countries, which experienced a 30 percent increase to $130 billion between January and August of this year.

Due to Yunnan’s close proximity to Laos, Myanmar, Vietnam, Thailand, Cambodia, Bangladesh and India, the Chinese province could potentially play an important role in sub-regional cooperation.

As a junction linking the Pacific and Indian oceans by land, Yunnan has set its sights on advancing construction of an international transport corridor, connecting China with neighbouring countries under the “Belt and Road” initiative. With a goal in developing a new high point of economic cooperation in the Greater Mekong sub-region, China is determined on opening up its South to Southeast Asia.

Currently, several routes have opened including the Kunming-Bangkok highway, an expressway from Kunming to the China-Myanmar border, China-Laos border and China-Vietnam border.

For water transportation, there is international shipping along the Lancang-Mekong river corridor.

An official from the Lao National Railway State Enterprise has stated that the Laos section of the China-Laos-Thailand railway is about 13.5 percent completed after construction began in January.

The five-year endeavor is slated to be completed December, 2021 with an estimated total cost of $5.9 billion USD. Laos holds 30 percent of shares in the company while China holds a 70 percent stake.

The Export-Import Bank of China has been named the primary source of loans for the project, in which debt financing accounts for 60 percent of total expenses.

A co-convenor of the Asia-Pacific Structure Finance Association in Hong Kong, Ms Susie Cheung expressed concerns about funding the “Belt and Road” initiative due to limits to public funding, stressing that financing is a critical issue.

“Costs of bank loans are going to rise due to Basel rules and China’s liquidity is going to dry up,” she warned.

Ms Cheung suggested China and other countries involved in the initiative should develop asset-backed securities (known as securitization) in order to tap international funding.

She urged the Chinese government to coordinate among countries to create a securitized asset class by introducing a standardized project document, harmonized rules and regulations and creating a credit rating agency.

The Asian Development Bank estimated that to bring it to reality, Asia would need to invest $26 trillion between 2016 and 2030 in order to maintain growth momentum. For Asean infrastructure alone, the investment would need to be about $3.2 trillion. 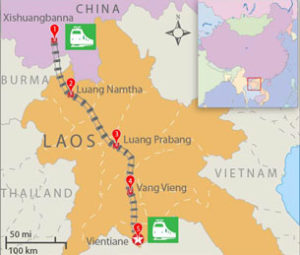