Like wildlife in biological hotspots worldwide, Laos’ wild and domesticated elephants alike are facing a time of rapid and significant change, amid increased man-made developments and a fast-changing natural and socio-economic environment, Laotian Times writes. 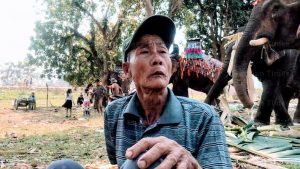 At the end of last month when the Elephant Festival took place in Xayaboury, the Laotian Times met Mr Vandy.

A man with some decades under his belt, he boasts a deep bond with his own elephant, as one might with a fellow human family member or close friend.

Having spent most of his life with these honored beasts, he is in tune with the feelings of the great animals, and particularly his own.

He and his sole elephant are deeply connected emotionally after so many decades together. 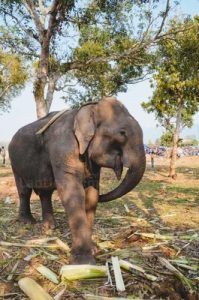 Now, his prized charge is now away on loan to contribute to tourism development in the capital, intriguing new generations of visitors from at home and abroad.

As for many, the key reason to lend an elephant to the tourism sector is due to the huge daily feed requirements involved in maintaining such a specimen.

Mr Vandy misses his elephant just as if his son had left for faraway climes.

Yet the struggle to find money to maintain, feed and care for his prized animal is real.

A mature elephant needs to eat two tonnes of fodder a day, which is more than Mr Vandy can afford without paid work.

For some years now, domesticated elephants in Laos have no longer been employed in pulling logs felled in the country’s forests, as change came when government authorities clamped down on the export of unprocessed wood, putting elephants and handlers out of work.

To use elephants for such means is also in conflict with modern animal protection rights and treaties.

Mahouts nowadays often lend their elephants out for tourism projects.

Over a smoke, Mr Vandy told his own story and tales of his father as a mahout before him.

Hundreds of years ago, Laos had millions of elephants, which were instrumental in family work.

In Xayaboury province almost every family had elephants. Unsurprisingly, the elephant has remained the largest animal in Laos in recorded history.

Wild forest elephants were caught and domesticated for work. The elephant was one of the only wild animals that people didn’t eat.
Their huge size engendered respect as a the true owner of the forests.

Anytime before setting off to catch a wild elephant to train, people at that time had to do some processions and ceremonies to show respect.

In a story told by his father, Mr Vandy explained that the wife and everyone in the family were prohibited from killing any animal while the father or husband is out catching an elephant.

They had to stay at home, and that would keep the father and husband safe, because if the wife did anything wrong, the forest spirit might punish them all.

“Elephants might even kill their husbands and the other men,” Vandy said.

His father said to catch elephants, he and his friends would fashion a trap by digging a large hole in the ground covered by grass and some banana plants.

Elephants like to eat banana plants, so they will go there to eat and then can be trapped.

Of course, an elephant is a most powerful animal, so it’s difficult to retrieve it from the hole.

His father would feed the animals in the hole for some months until it became familiar with people, and under their control.

While there were millions of elephants in the jungle, people in that time respected the elephant, and keeping a elephant at home was a sign of wealth.  Indeed, Vandy’s father used to keep three elephants. 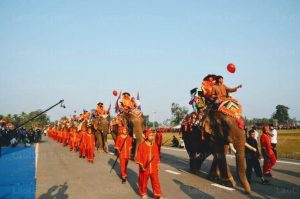 Vandy said keeping an elephant at that time was not expensive.

Upon the death of an elephant, people at that time would also perform a special ceremony.

“To know where an elephant spirit wants its earthly remains to be buried, we would throw a chicken egg, and according to legend it would break if it hit the right place,” said Vandy.

Some may believe that mahouts would overwork elephants, or drive them like slaves.

In many cases Mahouts loved their elephants like treasured pets, but of course, overwork did occur, and many mahouts lacked  education on the impact on elephants, thinking that the elephant would be fine as it is a powerful animal.

It has spent almost 40 years living with him.

“This elephant is very important for me because it has been the only one to bring income for my family and to feed all my children”, Vandy said.

“But now he is not with me because I can’t handle his needs. He needs to eat so much food, so it’d be so hard if he could not earn any income for me anymore”, he explained. 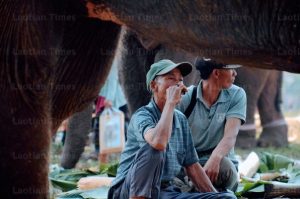 Parting is Such Sweet Sorrow

Vandy can visit his elephant twice per year in Vientiane and stay a few weeks, but it is clearly bittersweet to see his elephant again, knowing they have to return to living apart.

One one hand, he is so glad it has food, good care, and its welfare is being taken care of.

Yet one gets the feeling his heart’s desire will never truly be fulfilled until he and his giant, lumbering pachyderm are together at home once more to see out their twilight days together.