Thinking of cycling, in some parts of the world, and lycra-clad road warriors and their aspirants will come to mind.

In others, perhaps a leisurely cruise down a local bike path or in a park, perhaps by a lake or riverside.

Elsewhere, this is not quite the case. In the case of developing countries like Laos, cycling is often seen as hot, old fashioned, disadvantageous and even highly dangerous. 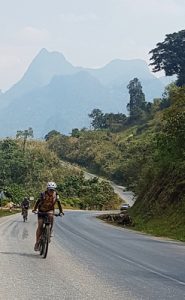 You could say being a cyclist in Laos is generally no “ride in the park”. 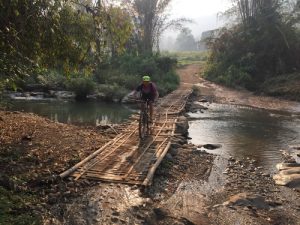 In fact, it can be an activity that best suits the determined.

The fairly flat Vientiane plain notwithstanding, Laos is certainly a majority mountainous country. 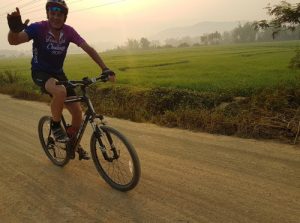 The quality of roads can leave a great deal wanting. Its a fact that surfacing on many a Lao thoroughfare is often in a more rustic condition than you see at the neighbors. Add a very warm, tropical climate and variable air quality as issues that impact. 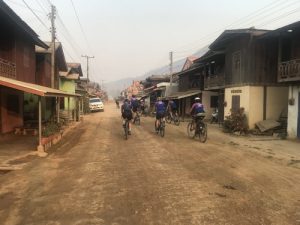 It is also a developing nation where most folks aspire to motor vehicle ownership, cycling does not convey the status it does in more developed nations.

Cycling them puts you in close contact with all the vehicles, large and small, controlled by drivers of all levels of skill, experience, and temperament.

So why would a woman cycle?

Growing up in neighboring Vietnam before making a home with her husband from Laos, she has been living in the capital Vientiane for some years.

She comes up against reflexively scornful attitudes toward the humble bicycle and cyclists both on the streets and at home.
It’s positive health and social impacts are less understood. 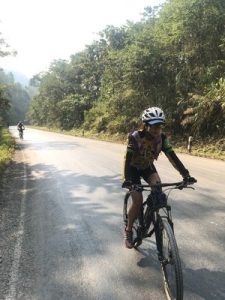 Cycling can be seen as a dangerous activity and certainly not one for a woman, particularly wife or mother, to be engaged in.

Ms Thu Ng tackled her fourth Team Dai Challenge for charity raising some US$14,630 to date for the HOPE Center’s work.

She shared her thoughts on the ride from her perspective as a keen cyclist and woman. 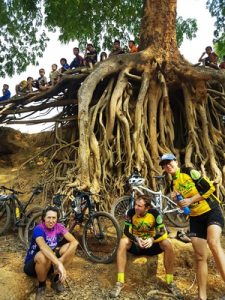 “This year’s Team Dai Challenge was my fourth and for me, it was another great year of riding with like-minded and supportive Team Dai members.”

“In the Asian culture in which I grew up, I normally get told that women should stay home and not risk their lives.

“This mindset makes it hard for us women to engage in what is seen as extreme sports or exercise.”

“But I am a real optimist and believe that the best part of life is having the freedom to do whatever you are passionate about.

“This is happiness and this is all about life.”

Similarly, she was drawn to the engaging aspect of making a contribution to the society of the country she calls home.

“It has been said that giving is a simple solution towards some of the world’s most complicated problems.

“So every year, we volunteer our time and efforts to carry out Team Dai’s mission of raising funds to help our community.

“For me personally, the ability to give support and spread love is the very best part of every Team Dai challenge.” 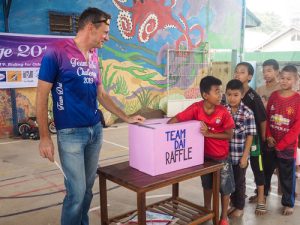 The recipient of this affection in 2019 is the HOPE Centre, a community outreach program launched by ARDA Language Centre Vientiane in 2006.

HOPE Centre helps over 200 children and youth who are at risk of abuse, exploitation, and human trafficking.

The center aims to serve the most vulnerable children and youth in the community to see them grow and develop in a healthy way and give them new hope for the future. 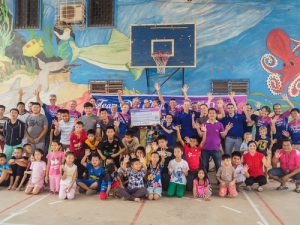 It does so by providing a safe environment where children begging on the streets, those living in slum communities and working could stop in during the day to bathe, receive medical care, a nutritious meal, general education and be involved in other activities including arts & crafts, music, sports and participate in special events.

Staff work alongside families living in poor communities to alleviate child labor and exploitation by helping them improve their livelihoods, parenting skills, and living conditions so that their children will have a suitable place to live and attend school.

Scholarships are also provided to help deter children from begging or being forced into other forms of child labor while providing enhanced educational opportunities.

Meanwhile, sporting activities including soccer and volleyball are used to divert children and youth from being drawn into a downward spiral including drug abuse.

Located at ARDA Language Centre in Vientiane, HOPE Centre welcomes every child, particularly the poor and vulnerable, a worthy cause Team Dai are proud to support.