Hundreds of thousands of cross-border passenger and vehicle trips each year are made possible by the first friendship bridge that crosses the Mekong from Laos’ capital to neighboring Thailand and several additional spans just like it.

Yet, there was a time when no such span existed. 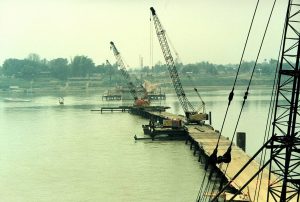 People and items had to be ferried across, a time consuming and expensive business. 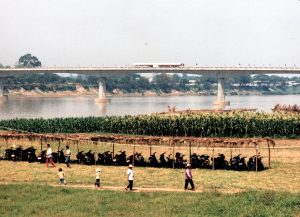 More Than Just a Bridge: 25 Years of Friendship between Laos, Australia and Thailand

“Twenty-five years ago today on 23 April 1994, the First Lao-Thai Friendship Bridge over the Mekong River opened to the public. Funded and built by the Australian Government as a gift for the people of Lao PDR and Thailand, this Bridge created the first major ‘land link’ between the two countries.

The bridge replaced the ferry system that had previously been the only method to transport goods and people between Vientiane Capital and Nong Khai.

Two and a half decades later, this momentous event remains a significant milestone in the history and development of Lao PDR, and the 67 years of diplomatic relations between Lao PDR and Australia.

The Friendship Bridge is a project Australians continue to look on with great pride.

I feel deeply privileged that the celebrations for the 25th anniversary of the opening of the Bridge fall during my term as the Australian Ambassador to Lao PDR.

When Australia decided to fund the Friendship Bridge we knew the economic benefits for Thailand and Laos would be significant.

In 2017, 863,642 tourists arrived in Laos via the bridge – two times more than through Wattay Airport. The total value of imports and exports across the Bridge has grown by more than 100% since its opening.

The Australian Government also knew this critical piece of infrastructure would provide more than just a physical connection between two neighbors on the Mekong River.

The first Friendship Bridge cemented a new, peaceful era in the relationship between Lao PDR and Thailand.

Its construction also represented genuine collaboration among our three countries.

Whenever I cross the Friendship Bridge, I am proud to see that close cooperation continues to this day. I am struck by the continual teamwork of the Lao and Thai Governments who work side by side to manage and facilitate the crossing of people and goods between their two nations.

Over the past 25 years, with some ongoing support from Australia, the Lao and Thai Governments have also partnered for the effective maintenance and improvement of the Bridge and its operations.

That is why, to me, the Bridge remains a symbol of the enduring bonds of friendship between Lao PDR, Thailand and Australia, and the ongoing commitment of Australia to the peace and prosperity of its neighborhood.

The design and construction of the Bridge was led by Australia, with the support of Lao and Thai workers and materials.

Two and a half decades on, the Bridge also reminds us of the contribution high quality and sustainable infrastructure can make to local development in the short and long term. I look forward to celebrating these trilateral achievements in 2019, with a range of the 25th anniversary events together with the Lao and Thai people.

On your next trip over the Friendship Bridge, you may notice some Australian flags in the center catching the breeze over the Mekong River.

These flags, placed in-between those of Laos and Thailand, will remind travelers of the bonds of friendship between our three countries for the remainder of the year.

On the morning of 26 April 2019, I will join representatives of Vientiane Capital and Nong Khai Province and to participate in a special blessing and alms ceremony-taking place on the Bridge.

On the morning of 27 April, the people of Laos and Thailand are invited to join a special fun run and cycling race across the Bridge to celebrate the people-to-people links brought about by the Bridge.

For the remainder of the year, the Australia in Laos Facebook Page will also be sharing 25 stories about the Bridge to commemorate its 25 years.

These will include interviews with Lao PDR Ministers, the Nong Khai Governor, Australians involved with the building of the bridge, and everyday people whose lives have been improved because of the Bridge’s construction.

These activities will elevate an already significant year for Lao PDR-Australia relations, as we celebrate the 67th year of our diplomatic relationship, and the 45th anniversary of Australia becoming the first dialogue partner of ASEAN.

All of these milestones are an opportunity to reflect on our progress towards greater stability and growth in our region.

And just like the First Lao-Thai Friendship Bridge, none of these benefits could be achieved without mutual respect, genuine collaboration, and a wish to leave future generations with a sustainable path to prosperity.

Australia looks forward to working with the people of Laos, Thailand and the region as we build that path together.