The Head of the Resettlement Office of Xe-Pian Xe-Namnoy Power Company has announced that part of its dam is likely to break its banks, which could cause over five million tons of water to flow downstream.

A signed letter from Mr Lee Kang Yeol Head of the Resettlement Office of Xe-Pian Xe-Namnoy Power Company has been spread around social media in Laos.

The letter states that Saddle Dam D is in a “very dangerous condition” due to heavy rainfall in the Paksong River Project area. Water has already overflowed over the dam crest, according to the letter. 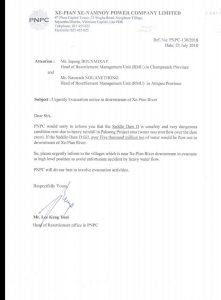 The letter goes on to inform authorities that nearby villages must be evacuated to high elevation areas, and that the company will do its best to assist with evacuation efforts.

Villagers are now being evacuated, while water levels continue to rise as heavy rainfall looks to continue over the next few days.