Geographically distant but with a shared solidarity born of shared experiences of struggles for independence against colonial and imperial domination and sharing similar Marxist-Leninist institutions of state governance, the nations, peoples and ruling parties of Laos and Cuba have long-shared affiliations and affections from afar.

The friendship was celebrated in close quarters over the weekend as new agreements and traditional ties between the two parties, states and peoples of Laos and Cuba were affirmed as the country’s President Miguel Diaz-Canel made a visit to the Lao People’s Democratic Republic on Saturday and Sunday.

“The name Cuba, for us, means friend in another sea,” Press Agency Prensa Latina reported the Lao President Bounnhang Vorachit as saying.

After talks, the two leaders witnessed the signing of a cooperation agreement on sports as well as a Memorandum of Understanding on cooperation between the Lao and Cuban central banks.

President of Cuba’s Council of State and Council of Ministers, Diaz-Canel is the third to hold the post since the country’s revolution led by its longtime party and state leader Fidel Castro, and is understood to be a front-runner to succeed Raúl Castro as First Secretary of the Communist Party of Cuba, the most important position, at the party congress in 2021.
Diaz-Canel reportedly reaffirmed Cuba’s intention to continue to cooperate and extend further assistance to Laos in fields such as human resource development, sports, and health, with the two sides exchanged views on regional and international issues of common interest.

The presidential visit is part of a tour that also sees official visits to Russia, the Democratic People’s Republic of Korea, China and Vietnam. 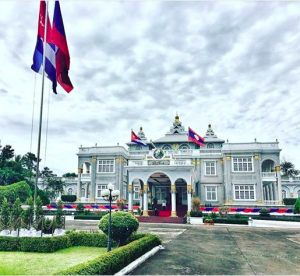